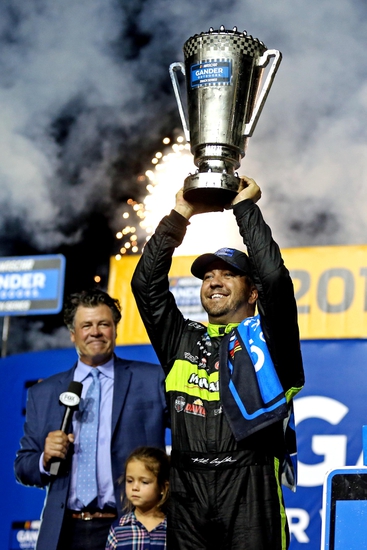 The NASCAR Gander RV & Outdoors Truck Series will conclude the 2020 season at the Phoenix Raceway on Friday evening as the Championship 4 have been determined. Phoenix is a 1-mile dog-legged oval with 2 distinct ends of the raceway. Friday’s race will be 150 laps to make up the 150-mile advertised distance. Friday’s race is going to be a no holds bar leaving nothing on the table race and should be very entertaining.

Here are a few drivers to consider for the NASCAR Lucas Oil 150.

Brett Moffitt +350– Brett will start the NASCAR Hall of Fame 200 from the 4th position. Moffitt earned his way into the Championship 4 at Phoenix on Friday and will be looking to win the race and the Truck Series Championship. Brett has the most laps of the Championship 4 at Phoenix, with experience here in the Xfinity Series as well. Moffitt has 2 starts at Phoenix in the Truck Series, with a win in 2018 and a 10th place finish 1 year ago. I can’t believe Moffitt has not won at least 4 races in 2020 but he most definitely has a chance on Friday night. Take Moffitt to pick up a victory at Phoenix.

Zane Smith +450- Zane will fire off on the front row in the 2nd position for the Lucas Oil. Friday marks Zane’s first trip to Phoenix in the NASCAR Truck Series. At Gateway International in August, Zane started on the pole, led 45 of the 160 laps early, but fell and finished 7th as the handling went away. Smith has been impressive at a variety of tracks in 2020 on the Truck Series circuit and has a bright future ahead. Smith is not afraid to mix it up, so look for him to be in contention on Friday night.

Grant Enfinger +1000- Grant will roll off from the pole position on Friday night at Phoenix. Enfinger comes off a big victory at Martinsville one week ago and has that momentum needed to win a championship. Grant picked up a victory at Richmond back September and finished 8th at Gateway in August. I can see Grant fading back to just outside the top 5 for the first couple of stages and keeping the truck clean. Watch Grant in the final stage after getting the needed adjustments, should be in contention for the win.

Austin Hill +1100- Hill will start the Lucas Oil 150 from the 17th position. After mechanical issues eliminated Austin from Championship contention at Martinsville last week, Austin will be looking to end 2020 on a high note. Hill will have nothing to lose on Friday. Austin did finish 3rd at Gateway International in August and 8th at Richmond in September where he led 65 laps. Hill is at a big value heading into Phoenix and I will throw some action in on this long shot.