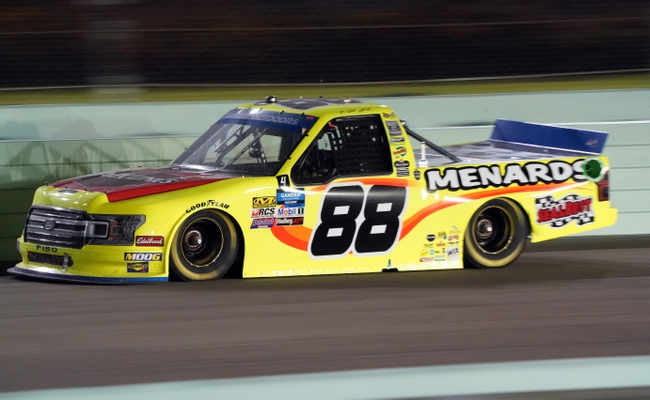 Where to Watch: Fox Sports 1 Stream live sports and exclusive originals on ESPN+. Sign up now!

The NASCAR Gander RV & Outdoors Truck Series heads to the Martinsville Speedway on Friday for the final race in the round of 8 in the 2020 playoffs in the NASCAR Hall of Fame 200. Martinsville is the smallest track on the truck series circuit at .526 mile. Martinsville is old school short track racing and there will be a ton of beating and banging during the race. Track position is the most important at Martinsville because it’s most difficult to pass.

Here are a few drivers to consider for the NASCAR Hall of Fame 200.

Brett Moffitt +350– Creed will start the NASCAR Hall of Fame 200 from the 4th position. Moffitt is locked into the Championship 4 at Phoenix next week and doesn’t have any added pressure here at Martinsville on Friday. Brett is one of the more experienced drivers on the circuit at Martinsville and we usually see that go a long way here. In 5 races at Martinsville, Brett has 4 top 10 finishes including 3 top 5s. A Martinsville victory is definitely a bucket list item for most NASCAR drivers, and I can easily see Moffitt crossing off Martinsville Friday night.

Matt Crafton +600- Matt will roll off from the 5th position on Friday night at Martinsville. Crafton comes into the NASCAR Hall of Fame 200 5th in the point standings, 12 points below the cut line. Crafton finished 6th at Texas 1 week ago and is looking for a top 3 finish at Martinsville. The pressure is on Crafton Friday, and no doubt he will need some help to secure a spot in the Championship 4. Crafton has the most experience at Martinsville of those racing in the NASCAR Hall of Fame 200 on Friday night. Consider placing a wager here on Crafton.

Sheldon Creed +600- Creed will take the green flag in Friday’s NASCAR Hall of Fame 200 from the pole position. Creed locked into the Championship 4 at Phoenix by winning at Texas back on Sunday. Creed has been one of the hottest drivers on the circuit with 3 top 3 finishes over the last 4 races including that victory at Texas on Sunday. Creed won at Gateway back in August and Gateway compares to the style of racing you see at Martinsville. Like Moffit, Sheldon doesn’t have any added pressure here at Martinsville on Friday and has a great chance of winning.

Brandon Jones +1600- Jones is my long shot play for the Truck Series race on Friday evening at Martinsville. Brandon will fire off from the 5th row in the 9th position for the NASCAR Hall of Fame 200. Jones will ride in the Kyle Busch Motorsports 51 truck on Friday night, and I expect this Toyota to be hooked up. Brandon has not raced at Martinsville since 2015 but still should have a leg up on the competition. Brandon getting some extra laps on Friday can also help him for the Xfinity race on Saturday afternoon. Take a shot on Jones Friday night.