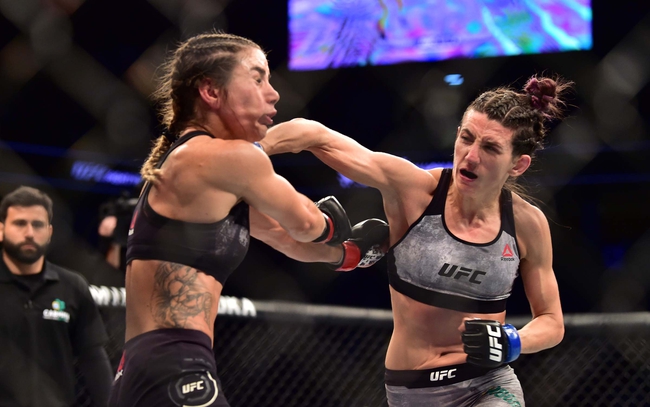 Carla Esparza and Marina Rodriguez face off in a women’s strawweight bout on UFC on ESPN 14 at UFC Fight Island, Abu Dhabi United Arab Emirates. There will be very limited fans in attendance for this game. Esparza is currently ranked seventh in the division while Rodriguez is ranked ninth.

Carla “Cookie Monster” Esparza comes into this fight with a 17-6 record overall and since coming into this fight they have won three fights in a row. Esparaza’s last fight came against Michelle Waterson and it was a very even fight. Esparza had one takedown and outstruck Waterson by one and that was enough to come away with a split decision win. Each of Esparza’s last three fights have gone the distance and each of those fights went her way.

Marina Rodriguez comes into this fight with a 12-2 record and since coming into the UFC she has gone 2-2. Rodriguez’s last fight came in December of 2019 against Cynthia Calvillo. In that fight, Rodriguez was taken down three times and that led to the loss. Rodriguez likes to stay on the feet and throw punches in bunches. Rodriguez is averaging 5.60 significant strikes per minute while absorbing 3.57 significant strikes per minute. Rodriguez is also averaging 0.48 successful takedowns every 15 minutes and 0.2 submission attempts during the same time period.

In this fight, Rodriguez needs to try and hunt the knockout early and make sure she doesn’t get taken down. If she gets taken down in this fight she is going to have a lot of issues.

Rodriguez has more power in her hands and she is going to get the job done in this game. Look for her to wear down Esparza and that will be the difference in this fight. Rodriguez might not finish the fight, but she will win this fight. The odds might be a little high for some, but this is a very solid play.