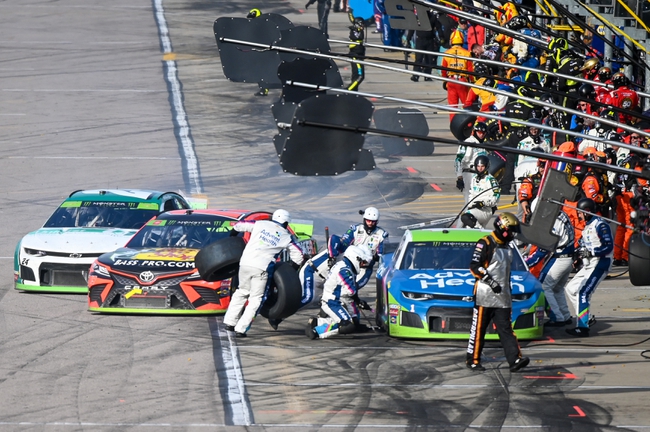 We make our second and final trip to Texas for the AAA Texas 500, an event that debuted in 2005 and has been won seven times by Chevrolet. Our frustrating NASCAR season continued last week, as we had a couple of close calls with Denny Hamlin and Joey Logano, but we have yet to find victory lane. We’re running out of races to fatten our pockets one last time.

Kevin Harvick, +770 - Kevin Harvick is worth a pick off form alone, as he has top-10 finishes in 12 of his last 14 races. Harvick is also the two-time defending champion at this race and has finished sixth or better in five of his last six appearances overall at the Texas Motor Speedway. Harvick has won races at this track in both the NASCAR Xfinity Series and NASCAR Camping World Truck Series. There’s bigger odds out there, but this is solid value with the guy who has won the last two times.

Denny Hamlin, +770 - Denny Hamlin has a top-five finish in five of his last six races and he won the previous Texas race this year. Hamlin has a victory at this particular race back in 2010 and has finished third or better in two of his last five trips at the Texas Motor Speedway. Hamlin has been as consistent as they come in the playoffs and has shown he can win in the Lone Star State.

Martin Truex Jr., +550 - Martin Truex Jr. has never won a race at the Texas Motor Speedway, but he does have top-10 finishes in seven of his last nine trips here, so the consistency can make you overlook the lack of wins. The reason to include Truex is because he’s closing in on the Drivers Championship, and he’s finished runner-up or better in four of his last seven races. Backing Truex is simply riding the hot hand this week.

Ryan Blaney, +1320 - Ryan Blaney has put together some strong runs in the playoffs this year and returns to a race where he finished runner-up a year ago. Blaney has finished sixth or better in three of his last four trips overall at the Texas Motor Speedway. Blaney also finished third or better in five of his six trips at this track in the NASCAR Xfinity Series. There’s a case to be made for these big odds and the 25-year-old.

Jimmie Johnson, +4400 - I don’t know why I put Jimmie Johnson on these cards knowing he’s way past his prime and may never win another race again. However, you’re getting these monster odds with somebody who has won this race five times since 2007. Johnson finished fifth in the previous Texas race this year and has finished fifth or better in six of his last 10 races here overall. Even knowng he’s not going to win, the history makes these odds hard to turn down.