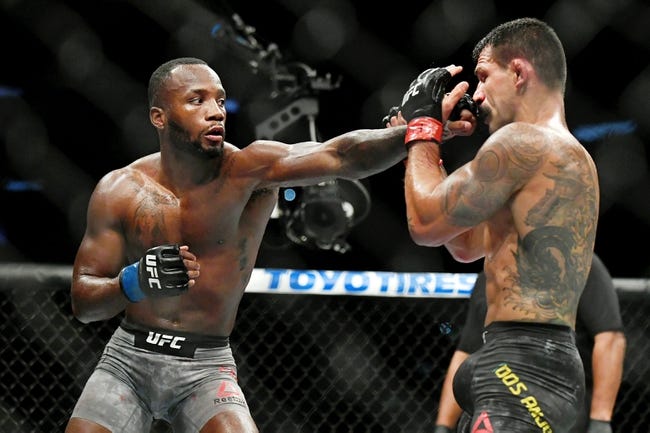 Belal Muhammad and Leon Edwards face off on Saturday in a welterweight bout for the main event of UFC Vegas 21 at the UFC Apex in Las Vegas.

Belal Muhammad comes into this fight with an 18-3 record overall and coming into this one he has won four fights in a row. Muhammad’s last fight came back on Februrary13th against Dhiego Lima and it was a unanimous victory.Muhammad outstruck his opponent 129-69 and he also had one takedown which sealed the victory. Muhammad is averaging 4.86 significant strikes per minute while absorbing 4.03 significant strikes per minute. Muhammad is averaging 2.03 successful takedowns every 15 minutes but he is only successful on 28 percent of his attempts. Muhammed is averaging 0.2 submission attempts every 15 minutes.

Leon Edwards comes into this game with an 18-3 record and coming into this fight he has won eight in a row. Edwards last fight came all the way back in July of 2019 against Rafael Dos Anos and it was a dominant performance. Edwards had three takedowns in that fight and that was the difference as he came away with the victory. Edwards is shooting 2.53 significant strikes per minute while their defense is giving up 2.05 significant strikes per minute. Edwards is averaging 1.37 takedowns every 15 minutes and he is successful on 31 percent of his takedown attempts. Edwards stops 70 percent of his opponent's takedown attempts and he needs to be good against that in this game.

Edwards has had a long layoff, but that isn’t much of a concern to me, and I expect he is going to settle into this fight early. Look for Edwards to control the fight early and he will come away with a victory by decision.