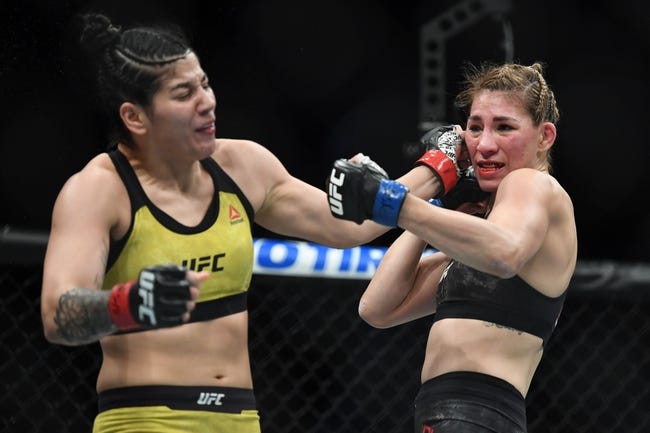 Yana Kunitskaya and Ketlen Vieira face off in a women’s bantamweight bout for the co-main event of UFC Vegas 19 at the UFC Apex in Las Vegas.

Yana Kunitskaya comes into this fight with a 13-5 record overall and since coming into the UFC she has a 3-2 record. Kunitskaya’s last fight came in August of 2020 and he was able to win that one by unanimous decision. She outstruck her opponent 43-6 in that fight, and that was the difference in the dominating victory. Kunitskaya’s three wins inside the UFC have all come by unanimous decision. Kunitskaya is averaging 4.49 significant strikes per minute while absorbing 3.17 significant strikes per minute. Kunitskaya is averaging 2.04 successful takedowns every 15 minutes. And he is successful on 53 percent of her takedown attempts. One issue she does have it stopping her opponents when they try to go for the takedown.

On the other side of this fight is Ketlen Vieira who comes into this game with an 11-1 record overall and since coming into the UFC he has won five of his last six fights. Vieira’s last fight came against Sijara Eubanks and her two takedowns were the difference as she came away with the unanimous decision. Vieira is averaging 3.10 significant strikes per minute and absorbing 3.98 significant strikes per minute. Vieira is averaging 2.02 successful takedowns every 15 minutes she is successful on 52 percent of her takedown attempts. Vieira also does a good job of stopping her opponent's takedown attempts, stopping 92 percent of them.