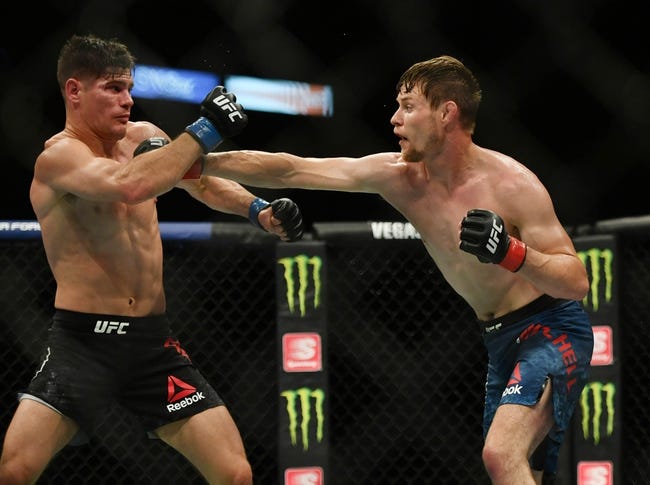 Charles Rosa and Darrick Minner face off in a featherweight bout for the main event of UFC Vegas 19 at the UFC Apex in Las Vegas.

Charles “Boston Strong” Rosa comes into this fight with a 13-4 record overall but since coming into the UFC he has only gone 4-4. Rosa’s last fight was a big victory over Kevin Aguliar by split decision back in June. Rosa outstruck Aguilar 69-53 and that was the difference as they were able to come away with the victory. Rosa is averaging 3.41 significant strikes per minute while absorbing 3.90 significant strikes per minute Rosa likes to get the fight to the ground and is averaging 2.01 successful takedowns every 15 minutes. Even though Rosa likes to get the fight to the ground, he is only successful on 33 percent of the attempts to get it to the ground. Rosa also at times will try to lock in a submission too, and he is averaging 0.9 of those every 15 minutes.

On the other side of this matchup is Darrick Minner who sits with a 25-11 record overall and since coming into the UFC he has gone 1-2. Minner’s one win in the UFC came in his last game against TJ Laraimie in 2020 it was only 52 seconds in when he locked in the submission and came away with the finish. Minner is averaging 3.61 significant strikes per minute while he is absorbing 2.00 significant strikes per minute. Minner is averaging 1.50 successful takedowns every 15 minutes but he is only successful on 33 percent of his attempts. Miner’s goal is to lock in a submission attempt and he is averaging 4.44 submission attempts every 15 minutes.

Rosa is going to lock down the submission attempt in this fight and that will be the difference in this game. Minner will get himself in a bad position and Rosa will come away with a win by submission attempt.