Alexandre Pantoja and Manel Kape face off on Saturday in a  flyweight bout in a main card showdown at UFC Vegas 18 at the UFC Apex in Las Vegas.

Alexandre “The Cannibal” Pantoja comes into this fight with a 22-5 record overall but coming into this game they have lost two of their last three fights. Pantoja’s last fight came against Askar Askarov in July of 2020 and he lost that fight by unanimous decision. Pantoja’s last two wins came by knockout. Pantoja is averaging 4.20 significant strikes per minute. Pantoja is averaging 1.08 takedowns every 15 minutes and he is successful on 36 percent of his takedown attempts. Pantoja is also stopping 67 percent of his opponents takedown attempts. Pantoja is also averaging 1.1 submission attempts every 15 minutes In this fight, Pantoja needs to try and land one of his big punches and end this one early.

On the other side of this fight is Manel “Starboy” Kape who will be making his UFC debut in this fight and this is an opportunity to make quite the statement with a win. Manel Kape comes into this fight with a 15-4 record overall and he has won each of his last three fights. His last fight came back on December of 2019 and in the second round he was able to win by knockout. Kape has nine wins by knockout, five by submission and one by knockout. Two of Mape’s losses have come by submission and the other two have come by decision. Maps will want to keep ths fight in the clinch and use his power there to land big strikes against Panteoja. 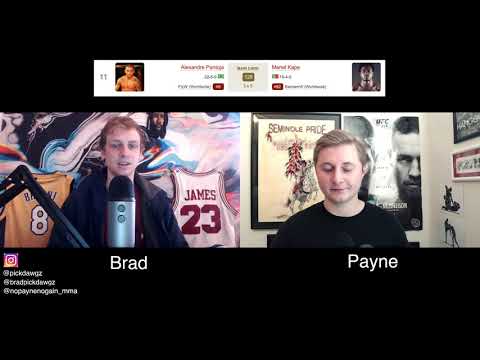