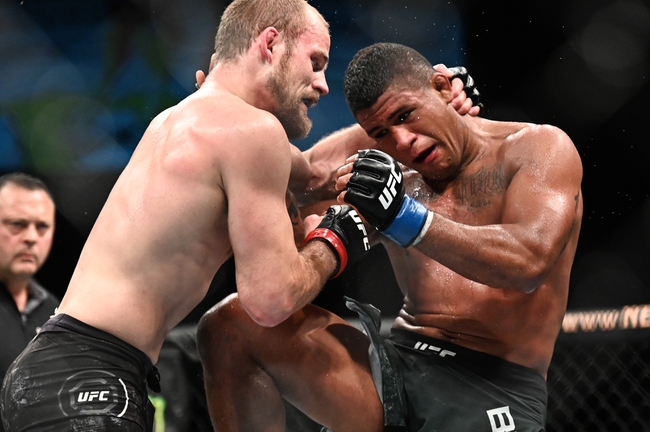 Demian Maia and Gilbert Burns are scheduled to fight in a welterweight showdown at UFC Fight NIght 170 at the Ginasio Nilson Nelson in Brazil. There will be no fans in the stands but the fights are still expected to happen.

Maia currently sits as the number five ranked fighter in the welterweight division and he is probably only a couple of wins away from getting a chance at the belt.

Maia’s last 11 wins have either been by submission or a decision. His last knockout was Dong Hyun Kim on July 6th 2012.

Gilbert Burns is currently the 12th ranked fighter in the welterweight and if he were to win this fight he would make a big jump in the standings. Burns has won the last four fights in a row and three of those were decided by a unanimous decision.

The last fight for Burns was on September 28th, 2019 against Gunner Nelson. Last April against Mike Davis, Burns did win by submission and he has talked about a submission being a gameplan heading into this one.

Maia absorbs less punches a minute and has a better defense than Burns according to the stats. Maia also has more takedowns a fight and allows less takedowns. Burns lands more significant strikes and also has a higher accuracy with his strikes.

Burns is good against submission artists and he should probably be able to fend that off. Maia has also been knocked out once so it’s hard to imagine that will happen in this fight. Look for Burns to control the fight and be more active, which will be enough to win this by decision.

Get Premium Picks Start Winning Now »
The pick in this article is the opinion of the writer, not a PickDawgz site consensus.
Previous Pick
Dominick Reyes vs. Jon Jones - 2/8/20 UFC 247 Pick, Odds, and Prediction
Next Pick
Renato Moicano vs. Damir Hadzovic - 3/14/20 UFC Fight Night 170 Picks and Prediction