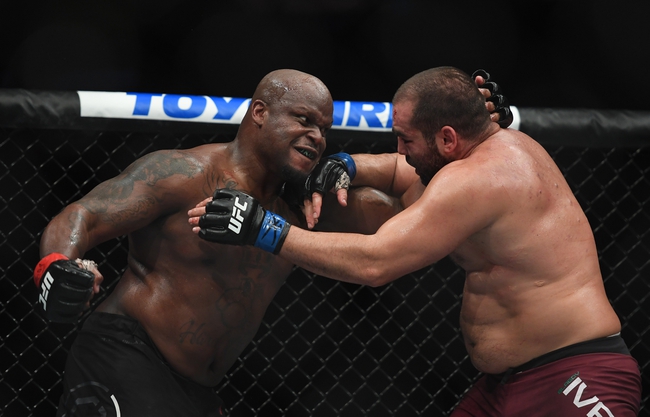 Derrick Lewis and Ilir Latifi fight Saturday during UFC 247 at the Toyota Center.

Derrick Lewis enters this fight with a 22-7 record and has won 82 percent of his fights by knockout. Lewis has won four of his last six fights and is coming off a November win over Blagoy Ivanov. Lewis is averaging 2.69 significant strikes per minute with an accuracy percentage of 50 percent. Lewis is averaging 0.47 takedowns with an accuracy percentage of 23 percent. Lewis snapped back-to-back losses with a split decision victory where the numbers indicate he may have lost the bout. Either way, Lewis will take the win however he gets it and will now fight for the seventh time since 2018. There’s no surprises with Lewis when he steps into the octagon, as he’s a powerful striker who has produced knockouts in 16 of his last 19 wins. With a boxing background and heavy hands, Lewis looks to land that one shot that flips the fight upside down and eventually ends things. Lewis doesn’t have much of a ground game, and he has a reputation for tiring quickly, so he’s going to live and die with his standup striking and hopes to end things in the early rounds. Lewis has improved his takedown defense as of late and his movement has gotten better, but his power striking is where he makes his money. This will be Lewis’ 10th career fight in Texas, his residence.

Ilir Latifi enters this fight with a 14-7 record and has won 40 percent of his fights by knockout. Latifi has split his last six fights and is coming off an August loss to Volkan Oezdemir. Latifi is averaging 2.29 significant strikes per minute with an accuracy percentage of 40 percent. Latifi is averaging 1.85 takedowns with an accuracy percentage of 30 percent. Latifi is coming off back-to-back losses for the first time in his career and looks for his first victory since beating Ovince Saint Preux at UFC on Fox 28. Latifi has now been knocked out in three of his last four losses. Latifi comes from a boxing and submission wrestling background, so he’s well balanced and one of the more comfortable heavyweights on the canvas. Latifi is probably most effective standing up where he can use his power and technique, as he’s a clean boxer who dodges strikes well and is an impressive counterpuncher. Latifi defends takedowns at a very high level and is a violent takedown artist himself who usually goes with the slam approach and has two victories via the guillotine choke. The concern for Latifi is cardio, as he’s a massive guy and he’s lost six of his last 10 fights that made it out of the first round. This will be Latifi’s second career fight in Texas.

This is an even fight on paper when you consider both of these guys have terrific punching power and they also have a reputation for gassing out through one round. Latifi is the more balanced fighter between the two due to his wrestling background and that provides an opening for an upset. However, Latifi is in sloppy form right now, and he’s fighting Lewis who has a massive size and reach advantage. With Lewis’ ability to drop fighters with a shot that doesn’t even land cleanly, Latifi is going to have a hard time dodging the length. This fight is also in Houston, the city Lewis’ reps hard, so you know he’s out to put on a show.

Give me Lewis for the victory, and I’ll take it by finish to trim down the ML price.