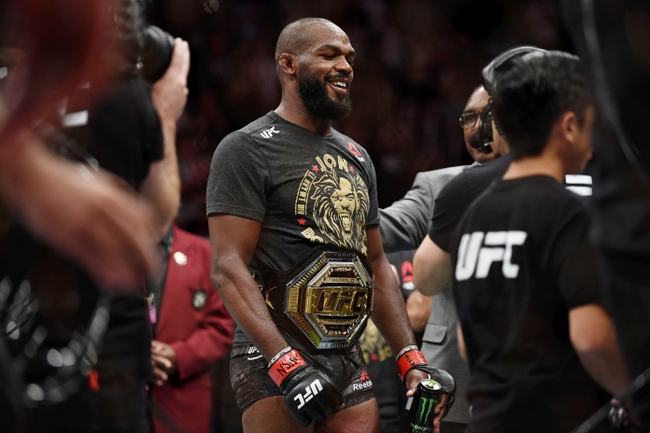 Jon Jones and Dominick Reyes fight Saturday during UFC 247 at the Toyota Center.

Jon Jones enters this fight with a 25-1 record and has won 43 percent of his fights by knockout. Jones has won his last 18 fights and is coming off a July win over Thiago Santos. Jones is averaging 4.31 significant strikes per minute with an accuracy percentage of 58 percent. Jones is averaging 1.90 takedowns with an accuracy percentage of 47 percent. Jones is coming off a close split decision victory that he shouldn’t have come close to losing but was a bit interesting. Santos suffered a serious knee injury, had very limited movement and was still able to complete the five rounds and make things close in the judges eyes. Jones still won, but it’s the first time in a while where we could say Bones is possibly human after all. Still, there’s nothing Jones doesn’t do at a high level, and he does a wonderful job of taking away his opponents strengths. A highly efficient striker who is a master on his feet and just as polished in the clinch, Jones is always in complete control and is one of those fighters who seems to get stronger as the fight goes along. This will be Jones’ first career fight in Texas.

Dominick Reyes enters this fight with a 12-0 record and has won 42 percent of his fights by knockout. This will be Reyes’ fifth fight since 2018 and is coming off an October win over Chris Weidman. Reyes is averaging 5.05 significant strikes per minute with an accuracy percentage of 52 percent. Reyes is averaging 0.40 takedowns with an accuracy percentage of 17 percent. Reyes is coming off probably the biggest win of his career and it’s the second time he’s earned performance of the night honors since moving up to the UFC about three years ago. Reyes has quietly been building up his resume, but it’s fair to question if he’s ready for a fight this big at this stage of his career. Reyes is a big guy at 6’4” and uses his legs well to the point he’s produced clean knockout victories in the past. Reyes has excellent takedown defense and showed in his last bout that he has some pop in his hands. An athletic fighter who moves well in the octagon, Reyes is a respectable talent who could poise a threat if he plays it smart. This will be Reyes’ first career fight in Texas.

When you watch Reyes on film, it’s easy to see why he could cause problems for Jones. Reyes is tough to take down and he’s quick back to his feet if he does slip. Reyes uses his legs extremely well and can knockout anybody if landed cleanly. Reyes also has some power in his hands and does a fine job of getting in and out with his combinations. Reyes isn’t terrible and he has the potential to make things somewhat competitive if he brings his A game. The problem is Reyes hasn’t fought anyone close to as skilled as Jones, as he’s giving up tons of reach in this bout. So, the devastating leg kicks people talk about and the power in his hands lose some steam when you consider what he’ll have to go through to land those shots. Jones has a massive reach advantage and does everything Reyes does better.

Jones wins this fight, but instead of laying massive juice with an outright win, we can shave the price down for a better return by taking this bout not to go the distance.

Get Premium Picks Start Winning Now »
The pick in this article is the opinion of the writer, not a Pick Dawgz site consensus.
Previous Pick
Ilir Latifi vs. Derrick Lewis - 2/8/20 UFC 247 Pick, Odds, and Prediction