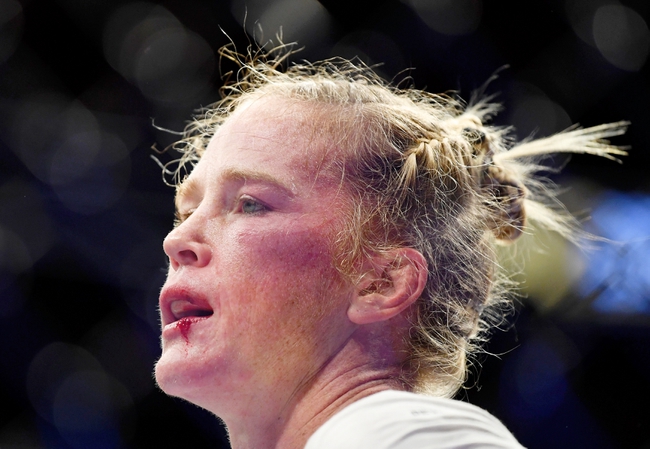 Holly Holm and Raquel Pennington fight Saturday during UFC 246 at the T-Mobile Arena.

Holly Holm enters this fight with a 12-5 record and has won 67 percent of her fights by knockout. Holm has lost five of her last seven fights and is coming off a July loss to Amanda Nunes. Holm is averaging 2.82 significant strikes per minute with an accuracy percentage of 34 percent. Holm is averaging 0.56 takedowns with an accuracy percentage of 31 percent. Holm really hasn’t been the same since her massive upset win over Ronda Rousey in 2015, as she’s won just two fights since and is fresh off a first round knockout after eating a head kick. At now 38 years old and with injuries starting to pile up, you have to assume Holm is entering do or die territory in terms of her getting big fights moving forward. There’s no surprises with Holm, as she comes from a boxing and kickboxing background, and she does her best when fighting from a distance where she can let her legs go and use her reach to her advantage. Holm will press forward at times and does a wonderful job of landing combinations, but she sets up her best strikes from a distance. Holm also has good footwork, is an effective counterpuncher and works well behind her jab. This will be Holm’s fourth career fight in Las Vegas.

Raquel Pennington enters this fight with a 10-8 record and has won 60 percent of her fights by decision. Pennington has won five of her last seven fights and is coming off a July win over Irene Aldana. Pennington is averaging 3.4.2 significant strikes per minute with an accuracy percentage of 47 percent. Pennington is averaging 11.6 takedowns with an accuracy percentage of 28 percent. Pennington bounced back nicely from back to back losses, as she was much sharper with her strikes and produced a pair of takedowns. Pennington now looks to win back-to-back fights for the first time since 2016. Pennington has some power behind her strikes and can hold her own standing up, but she’s shown more grappling ability and ground work over her last few fights. Pennington has excellent cardio to be effective in later rounds, and she’s one of the tougher fighters on the female side in terms of taking a punch. Pennington has only been knocked out once in her career, which came against Amanda Nunes in UFC 224. This will be Pennington’s fifth career fight in Las Vegas.

This is a rematch from a UFC 184 bout that Holm won by split decision. Holm is rightfully the favorite in this contest as well given the size advantage and her proving herself in big fights with a lot on the line. Pennington looked shaky in two of her last three fights and she’ll have a disadvantage if this fight is standing up. With all that said, we’re getting plus money to fade an aging fighter in Holm who has been a shell of herself for much of her bouts since beating Rousey. Pennington is the younger fighter, has proven she can take a shot and has become a much better grappler over the course of her career. You have to like her chances.

Give me Pennington for the upset.