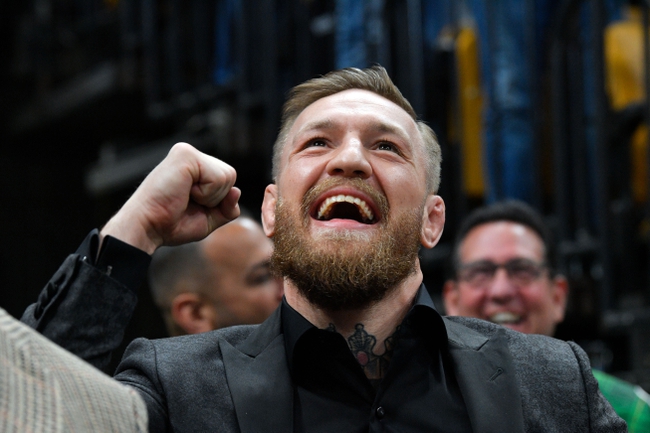 Conor McGregor and Donald Cerrone fight Saturday during UFC 246 at the T-Mobile Arena.

Conor McGregor enters this fight with a 21-4 record and has won 86 percent of his fights by knockout. McGregor has won 10 of his last 12 fights and is coming off an October (2018) loss to Khabib Nurmagomedov. McGregor is averaging 5.27 significant strikes per minute with an accuracy percentage of 49 percent. McGregor is averaging 0.75 takedowns with an accuracy percentage of 63 percent. The main question with McGregor is how sharp is he, as he has as many boxing matches as he does UFC fights over the last three years and he’s been in a lot of personal situations. It’s fair to question how motivated McGregor is at this stage of his career, as he seems more caught up in being rich and famous than anything else. When at the top of his game, McGregor is one of the better fighters on the UFC roster with an accurate and tricky standup striking attack that allows him to effortlessly fight out of either stance. McGregor is most known for his boxing, but he also defends takedowns well and has good enough cardio to be effective over five rounds. The main question is what McGregor will look like after such a long layoff. This will be McGregor’s seventh career fight in Las Vegas.

Donald Cerrone enters this fight with a 36-13 record and has won 47 percent of his fights by submission. Cerrone has split his last 12 fights and is coming off a September loss to Justin Gaethje. Cerrone is averaging 4.35 significant strikes per minute with an accuracy percentage of 47 percent. Cerrone is averaging 1.22 takedowns with an accuracy percentage of 36 percent. Cerrone was simply overwhelmed in his last fight and it was kind of expected if you’ve been paying attention. As tough as Cerrone is and no matter how exciting his style is, Cowboy is simply being overworked and this will actually be his eighth fight in just under two years. Eventually, Cerrone is going to run out of gas, especially taking on these proven veterans. Cerrone is a versatile fighter who is a well decorated kick boxer, a deep background in Muay Thai and is comfortable on the canvas to the point he has 17 career submission victories. A total of 27 of Cerrone’s 36 victories have come by some sort of stoppage. A polished wrestler who almost always has the edge on the canvas, Cerrone closes range well with those leg kicks and usually gets the fight where he wants it. A tough fighter who clearly isn’t backing down from the competition, Cerrone is a fan favorite who leaves it all in the octagon. This will be Cerrone’s 12th career fight in Las Vegas.

Cerrone has won a lot over this last two year span in the underdog role and I understand why you’d find value in backing him here against somebody who hasn’t fought in well over a year. I’m always afraid of the unknown and there are a lot of question marks with McGregor right now. With that said, on paper, McGregor will get a fight he’s comfortable with against Cowboy, and that’s a fight where a lot of it is spent on the feet and trading strikes. McGregor is the longer fighter and he can throw Cowboy a lot of different looks the way Tony Ferguson did. I don’t think it’s a coincidence this is McGregor’s comeback fight to get him back in the swing of things.