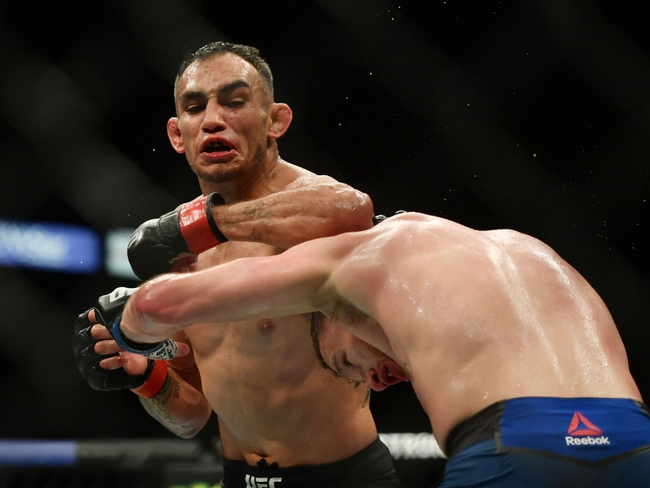 Tony Ferguson and Charles Oliveira face off in the lightweight bout for the co-main event of UFC 256 at the UFC Apex in Las Vegas.

Tony Ferguson comes into this fight with a 26-4 record and he has won 12 of his last 13 fights. The one loss during that stretch though was in his last fight against Justin Gaethje.In that fight it was late in the fifth round that the fight was finished by knockout. The two previous wins by Ferguson were by knockout, and there is no doubt he will look to finish this fight by knockout too.Ferguson is averaging 5.80 significant strikes per minute, while absorbing 4.04 significant strikes per minute. Ferguson usually likes to usually keep the fight on the feet but he is averaging 0.49 successful takedowns every 15 minutes. Ferguson also stops 75 percent of his opponents takedown attempts.

On the other side of this fight is Charles Oliveira who comes into this fight with a 29-8 record overall and he comes into this game having won seven fights in a row.Oliveira’s last fight came against Kevin Lee in March of 2020 and in the 3rd round he was able to lock in a guillotine choke. Oliveira is currently averaging 3.27 significant strikes per minute while absorbing 3,08 significant strikes per minute. Oliveria wants to get the fight to the ground and he is currently averaging 2.61 successful takedowns every 15 minutes. Oliveira is only successful on 42 percent of her takedown attempts and he stops 57 percent of his opponents takedown attempts. Oliveira also attempts 2.8 submission attempts every 15 minutes. The one thing that can’t happen in this fight for Oliveira is he can’t let his foot off the gas. Ferguson won’t wear down so Oliveira can’t let that happen.

Oliveira has found a lot of success coming into this one, but I think he is going to struggle against a guy like Ferguson. Ferguson is going to bring constant pressure, and he is going to have no issue dominating this fight. Back Ferguson on the money line.