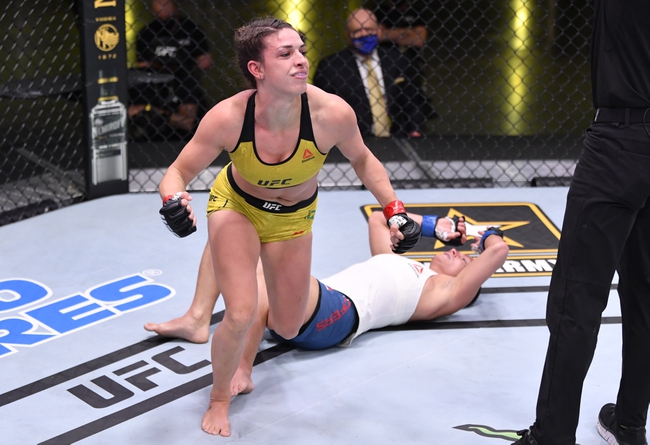 Mackenzie Dern vs. Virna Jandiroba face off in a women’s strawweight  UFC 256 at the UFC Apex in Las Vegas.

Mackenzie Dern has found a whole lot of success so far during her career and coming into this one she sits with a 9-1 record. Dern has won two fights in a row and both have been finished by submission. Her last fight came back on September 19th against Randa Markos and it was only 3:44 seconds into the very first round that she finished the fight with an armbar submission. Dern’s only loss came against Amanda Ribas in October of 2019 and that was a fight she lost by unanimous loss. Dern is averaging 3.07 significant strikes per minute while absorbing 3.66 significant strikes per minute. She likes to keep the fight on the feet and is only averaging 0.39 successful takedowns every 15 minutes. Dern is also averaging 3.1 submission attempts every 15 minutes and there is no doubt that is how she will try to finish this fight.

Virna Jandiroba comes into this fight with a 16-1 record overall and since coming into the UFC she has gone 2-1. Jandiroba opened up her UFC career with a loss, but since that point, she has won back-to-back fights by submission. Her last fight came on August 15 and that fight she won by armbar. Jandiroba is averaging 1.22 significant strikes per minute while absorbing 1.52 significant strikes per minute. Jandiroba wants to get the fight to the ground and coming into this one she is averaging 4.57 takedowns every 15 minutes and she is successful on 50 percent of her attempts. Jandiroba is averaging 3.3 submission attempts every 15 minutes Much like Dern she is going to want to finish this fight by submission attempts.

Jandiroba is a good fighter, but this is a big step up in competition and Dern is going to have no issue getting the job done in this one. Dern is going to get that submission locked in, and that will lead to the victory. Back Dern to win this fight by submission.