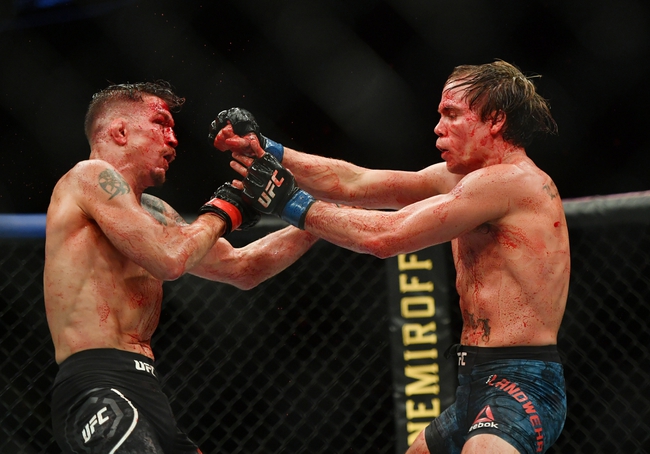 Movsar Evloev vs. Nate Landwehr face off on Saturday in a featherweight bout at UFC Vegas 16 at the UFC Apex in Las Vegas.

Nate “The Train” Landwehr comes into this fight with a 14-3 record overall and since coming into the UFC he has a 1-1 record. Landwehr opened up his UFC career with a loss against Herbert Burns, a fight he lost because of a knee in January of 2020. Landwehr’s last win came in May of 2020 and that was a fight he won by unanimous decision.Landwehr was actually taken down once in that fight, and outstruck, but he was able to come away with the unanimous decision victory. Landwehr is averaging 6.89 significant strikes per minute while absorbing 7.22 significant strikes per minute. Landwehr is also stopping 85 percent of his opponents' takedown attempts.

Movsar Evloev comes into this fight with a 13-0 record overall and he has gone 3-0 inside the UFC. Each of those three wins inside the UFC came by unanimous decision. In the last fight, Evloev beat Mike Grundy after out striking him 79-20. Evloev was taken down five times in that fight, but he still came away with the victory. Evloev is averaging 4.44 significant strikes per minute while absorbing 2.76 significant strikes per minute Evloev is averaging 3.00 successful takedowns every 15 minutes but he is only successful on 33 percent of takedown attempts. Evloev also stops 68 percent of his opponent's takedown attempts and even though he struggled with that in the last fight, overall he does good.

Evloev is the better fighter but he is a big favorite, and he really doesn’t have the knockout power. Landwehr does have knockout power and there is a chance he could catch Evloev in this one. Throw a couple of dollars on Landwehr to win this fight.