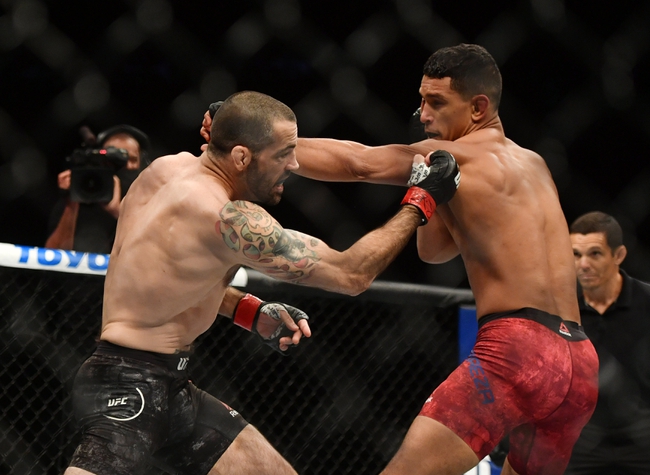 Miguel Baeza and Takashi Sato face off in a welterweight bout at UFC Vegas 15 on Saturday at the UFC Apex in Las Vegas.

Miguel Baeza comes into this fight with a perfect 9-0 record and since coming into the UFC he has gone 3-0. Baeza’s last fight came against Matt Brown in May of 2020 and early in the second round he threw a big punch and that was enough to finish the fight by knockout. Brown has won each of his last two fights by knockout. Baeza comes into this fight averaging 4.78 significant strikes per minute while absorbing 4.67 significant strikes per minute. Baeza is also averaging 0.54 successful takedowns every 15 minutes and he is successful on 33 percent of those attempts. He also is good against the takedown stopping 100 percent of his opponents attempts. Baeza is averaging 1.1 submission attempts every 15 minutes.

On the other side of this fight is Takashi Sato who sits with a 16-3 record overall and since coming to the UFC he has gone 2-1. Sato’s last fight came against Jason Witt in June of 2020 and he dominated that fight. Sato outstruck Witt 18-2 and less than a minute into the fight he was able to finish the fight by knockout. Sato wants to stand up and strike averaging 3.94 significant strikes per minute while absorbing 5.10 significant strikes per minute. He has proven before he is a fighter that can take damage but he does need to try and avoid it in this one. Sato is averaging 0.79 successful takedowns every 15 minutes and he stops 80 percent of his opponents takedown attempts. Sato probably won’t try to finish the fight by submission but he has lost one of his fights by submission.

Sato takes a lot of damage and that is going to hurt him in this one. Look for Baeza to throw some big fists early, and that will be the difference as Baeza comes away with the victory.