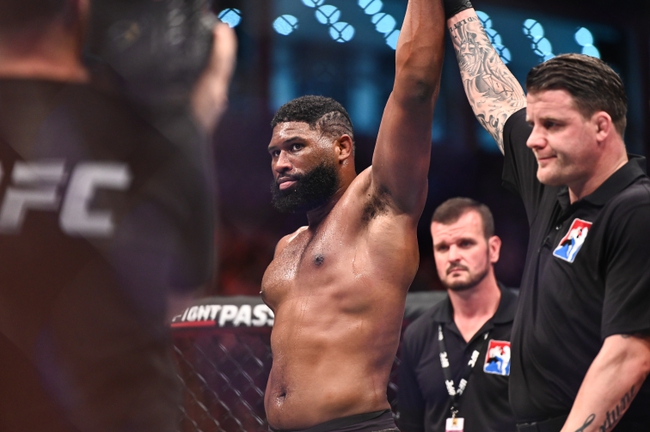 Derrick Lewis and Curtis Blaydes face off in a heavyweight bout for the main event of UFC Vegas 15 on Saturday at the UFC Apex in Las Vegas.

Derrick “The Black Beast” Lewis comes into this fight with a 24-7 record overall and he comes into this one having won three fights in a row. Lewis last came against Aleksei Oleinik in August of 2020 and he dominated that fight. Lewis outstruck him 35-2 and early in the second round he was able to finish the fight by knockout. Lewis is currently averaging 2.64 significant strikes per minute while absorbing 2.09 significant strikes per minute. Lewis mostly likes to keep the fight on the feet but he is averaging 0.54 successful takedowns every 15 minutes. Lewis also stops 52 percent of his opponents takedown attempts. One thing Lewis probably won’t be trying to do in this one will be trying to finish the fight by submission.

On the other side of this fight is Curtis “Razor” Blaydes who comes into this fight with a 14-2 record overall and he has won four fights in a row. Blaydes last fight came against Alexander Volkov in June of 2020. In that fight, Blaydes has 14 takedowns and although he couldn’t get the finish he won by unanimous decision. Blaydes goal is to get the fight to the ground and he is averaging 6.98 takedowns every 15 minutes. Blaydes is averaging 3.55 significant strikes per minute while absorbing 1.73 significant strikes per minute. Blaydes does struggle against his opponents takedown attempts, stopping only 33 percent of his opponents attempts. Blaydes is averaging 0.0 submission attempts every 15 minutes.. In this Blaydes is going to try and get the fight to the ground, and control Lewis.

Blaydes is going to get the fight to the ground, and that will be the end of it for Lewis. Lewis is going to make the fight go the distance, but there will be no doubt that he will have lost. Back Blaydes to win this fight by unanimous decision.