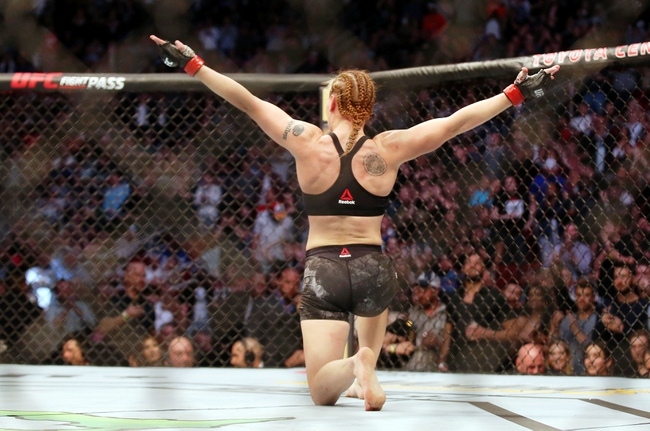 Valentina Shevchenko and Jennifer Maia face in the co-main event of UFC 255 for the women’s flyweight title at the UFC Apex in Las Vegas, Nevada.

Valentina “Bullet” Shevchenko comes into this fight with a 19-3 record overall and coming into this one she has won four title fights in a row. Shevchenko’s last fight came against Katlyn Chookagian in February of 2020 and she dominated that fight. Shevchenko outstruck her opponent 40-17 and she also had three takedowns in the fight. Early in the third round, Shevchenko had worn down her opponent and finished the fight off with her firsts. Shevchenko comes into this fight averaging 3.06 significant strikes per minute while absorbing 2.12 significant strikes per minute. Shevchenko is also averaging 2.09 takedowns every 15 minutes and she is successful on 54 percent of his attempts. She also stops 77 percent of her opponents Shevchenko is averaging 0.4 submission attempts every 15 minutes. Shevchenko is a great fighter on the feet but when she gets on the ground her ground and pound is some of the best inside the entire UFC.

Jennifer Maia comes into this fight with an 18-6-1 record overall and since coming into the UFC she has gone 3-2. Maia actually lost two fights ago, but in her last fight against Joanne Calderwood, she came away with the victory. Maia was actually outstruck in that last fight, but late in the first round she locked in an armbar and won the fight by submission. The other four fights inside the UFC have all gone to a decision. Maia is averaging 4.08 significant strikes per minute while absorbing 3.92 significant strikes per minute. Maia is also averaging 0.23 takedowns every 15 minutes and she is successful on 50 percent of the attempts. Maia also stops 70 percent of her opponent's takedown attempts every 15 minutes. Maia is averaging 0.2 submission attempts every 15 minutes.

There really isn’t a whole lot of value in this fight just because of big of a favorite Valentina Shevchenko is in this fight. Shevchenko is the better fighter and he is going to have no issue getting the job done. Back Shevchenko on the money line, but this play should only be used in parlays.