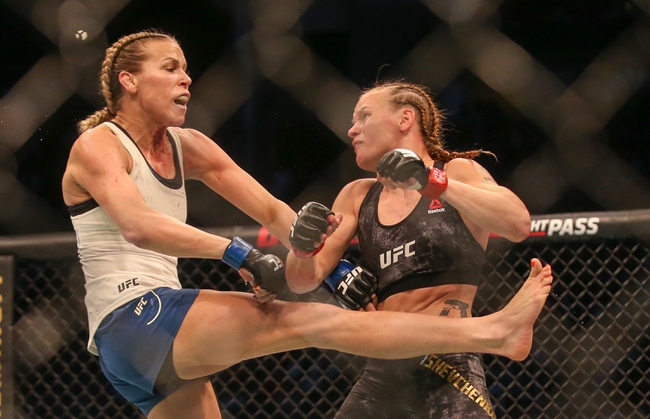 Katlyn Chookagian and Cynthia Calvillo face at UFC 255 in a women’s flyweight bout at the UFC Apex in Las Vegas, Nevada.

Katlyn “The Blonde Fighter” Chookagian comes into this fight with a 14-4 record but coming into this fight she has lost two of the last three fights. In Chookagian’s last fight against Jessica Andrade in October of 2020 she struggled in that fight. Chookagian was taken down two times in that fight, and late in the first round, she was finished by knockout. Chookagian is averaging 4.18 significant strikes per minute while absorbing 4.25 significant strikes per minute. Chookagian usually tries to keep the fight on the feet and she is averaging only 0.30 successful takedowns every 15 minutes but she is only successful on 15 percent of the takedowns. Chookagian also stops 48 percent of her opponent's takedown attempts. Chookagian is also averaging 0.5 submission attempts every 15 minutes.

On the other side of this fight is Cynthia Calvillo who comes into this fight with a 9-1-1 record overall and coming into this fight she has won three of her last four fights with the only other fight being called a draw. In Calvillo’s last fight against Jessica Eye she had four takedowns and outstruck her 113-70. Calvillo won the fight by unanimous decision and she hopes with a win, she will get a shot at that title. In the UFC, Calvillo has won six fights, three by unanimous decision, and three by rear-naked choke. Calvillo is averaging 4.21 significant strikes per minute while absorbing 3.37 significant strikes per minute. Calvillo is also averaging 1.97 takedowns every 15 minutes but she is only successful on 46 percent of her takedown attempts. Calvillo is also averaging 1.3 submission attempts every 15 minutes.

Chookagian has been inconsistent, but there is too much value with her as a big underdog. In this one, look for Chookagian to throw her hands early and avoid the takedown. Back Chookagian to get the job done at plus money.