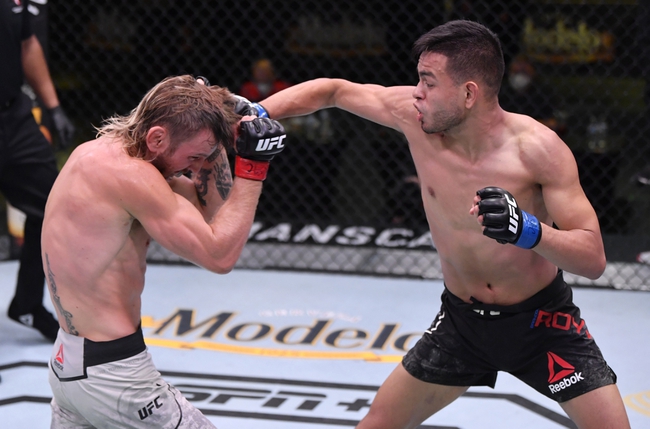 Brandon Moreno and Brandon Royval face at UFC 255 in a flyweight bout at the UFC Apex in Las Vegas, Nevada.

The winner of this fight very well could get a shot at the flyweight title bout.

Brandon “The Assassin Baby” Moreno comes into this fight with a 17-5-1 record overall and he has won two fights in a row. Moreno had lost three fights in a row before the two game winning streak. Moreno’s last fight came in May of 2020 against Jussier Formiga and he was able to outstrike his opponent 33-15 and that was enough to come away with a unanimous decision. Moreno is averaging 3.00 significant strikes per minute while absorbing 2.94 significant strikes per minute. Moreno is also averaging 1.75 successful takedowns every 15 minutes and he is only successful on 40 percent of his takedown attempts. Moreno is averaging 0.5 submission attempts every 15 minutes.

Brandon Royval comes into this fight with a 12-4 record overall and since coming into the UFC he has gone 2-0. Royval’s last fight came against Kai Kara-France in September of 2020 and early in the second round he finished that fight by submission attempt. Each of his first two wins if the UFC have come by submission. Royval is averaging 3.90 significant strikes per minute while absorbing 2.77 significant strikes per minute. Royval is also averaging 1.06 successful takedowns every 15 minutes and he is successful on 100 percent of his attempts. Royval is also averaging 3.2 submission attempts every 15 minutes and he will probably try to finish this fight by submission.

Moreno is the more experienced fighter, but I think Royval is going to be the one to get the better of “The Assassin Baby.” Royval  is going to lock in a submission attempt and that will be the difference as he comes away with a victory.