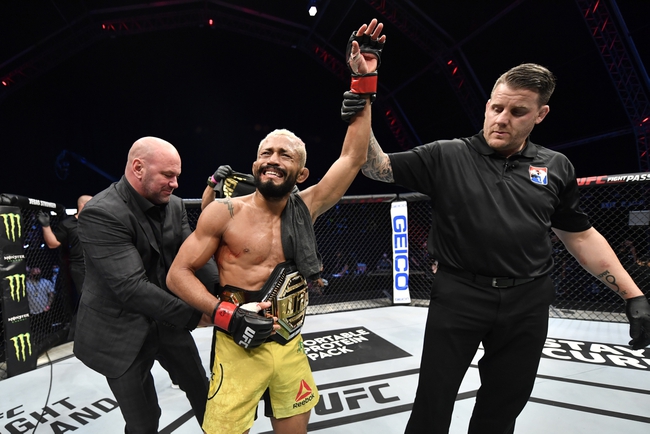 Alex Perez and Deiveson Figueiredo face in the main event of UFC 255 for the flyweight title at the UFC Apex in Las Vegas, Nevada.

Deiveson Figueiredo comes into this fight with a 19-1 record overall and will look to defend his belt for the first time in this fight. Figueiredo comes into this fight having won four in a row including his last fight against Joseph Benavidez which was for the belt. Two of his last three wins have been by submission with the other coming by knockout. Figueiredo is currently averaging 2.80 significant strikes per minute while absorbing 2.81 significant strikes per minute. Figueiredo is also averaging 1.71 takedowns every 15 minutes and he is successful on 50 percent of those attempts. Figueiredo also stops 61 percent of his opponents' takedown attempts. Figueiredo is always looking for the submission attempt and he is currently averaging 2.9 submission attempts every 15 minutes.

On the other side of this matchup is Alex Perez who once was a participant on Dana White’s Contender Series and now he is going to get his shot to fight for the belt. Perez comes into this fight with a 24-5 record overall and he has won three straight fights. Perez’s last fight came in June of 2020 against Jussier Formiga and in that fight, it was late in the 1st round that he was able to win the fight by knockout. The fight before that in January of 2020 he was able to win by submission. Perez comes into this game averaging 4.68 significant strikes per minute while absorbing 3.10 significant strikes per minute. Perez is averaging 3.03 successful takedowns every 15 minutes and he is successful on 50 percent of his takedown attempts. Perez is also really good at stopping the takedown doing so 87 percent of the time. Perez also averages 1.4 submission attempts every 15 minutes.