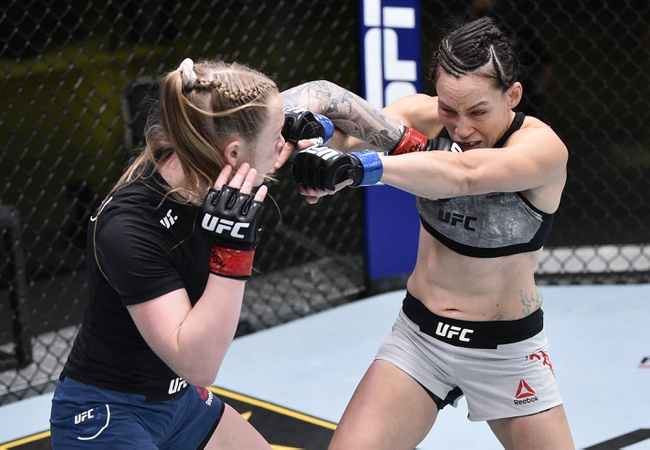 Kay Hansen and Cory McKenna face off in a women’s strawweight bout in a main card showdown at UFC Vegas 14 at the UFC Apex in Las Vegas.

Kay Hansen comes into this fight with a 7-3 record overall and she will be fighting her second fight inside the UFC when she steps into the octagon for this one. In her first fight in the UFC back in June of 2020, against Jinh Yu Frey, Hansen didn’t have a whole lot of problems getting the fight to the ground and wearing down her opponent. Midway through the third round. Hansen locked in an armbar and was able to win by submission. Hansen comes into this fight averaging 2.49 significant strikes per minute while absorbing 2.09 significant strikes per minute. Hansen is also averaging 2.41 successful takedowns every 15 minutes but she is only successful on 18 percent of her attempts. Hansen very well could try to finish this fight by submission too.

On the other side of this matchup is Cory “The Hobbit” McKenna who comes into this fight with a 5-1 record and she also has had one fight inside the UFC. McKenna fought in August of 2020 in Dana White’s Contender Series and she dominated that fight, which was enough to come away with the unanimous decision victory. McKenna is averaging 3.13 significant strikes per minute while absorbing 1.60 significant strikes per minute. McKenna is also averaging 1.00 successful takedowns every 15 minutes and she is successful on 100 percent of her takedown attempts. McKenna also stopped all of her opponents takedown attempts.

Kay Hansen has faced the tougher opponents, but McKenna looked good in her fight in Dana White’s Contender Series and she is going to find a way to get the job done in this one. Back McKenna to win this game and cash the plus money.