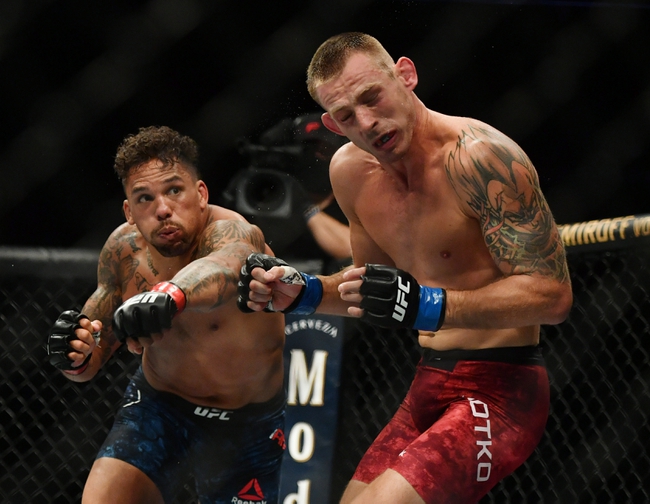 Eryk Anders and Antonio Arroyo off in a middleweight bout in a main card showdown at UFC Vegas 14 at the UFC Apex in Las Vegas.

Eryk “Ya Boi”Anders comes into this fight with a 13-5 record and coming into this fight he has won two of his last three fights. The one loss for Anders during that stretch was in his last fight against Krzysztof Jotko in May of 2020.Anders was outstruck by 25 in that fight and that led to the loss. In Anders two previous fights he won one by split decision and the other by knockout. Anders has a lot of power in his hands and will also use kicks to try and finish fights. Anders is averaging 3.02 significant strikes per minute while absorbing 4.18 significant strikes per minute. Anders is also averaging 1.34 successful takedowns every 15 minutes and he is successful on 34 percent of his takedown attempts.

On the other side of this fight is Antonio Arroyo who comes into this fight with a 9-3 record and since coming into the UFC he has won two of his three fights. Each of those two wins though, came during Dana White’s Contender Series. Arroyo’s last fight came against Andre Muniz in November of 2019 and he was taken down three times and that led to a unanimous decision loss. Arroyo is averaging 3.12 significant strikes per minute while absorbing 1.87 significant strikes per minute. Arroyo is averaging 1.95 successful takedowns every 15 minutes and he is successful on 41 percent of her opponents takedown attempts. Arroyo is averaging 0.4 submission attempts every 15 minutes.

Anders has faced the tougher opponents and that will be the difference in this game. Look for Anders to use his power and he will get the job done. Anders is still favorites and this is a very nice price to get him at.