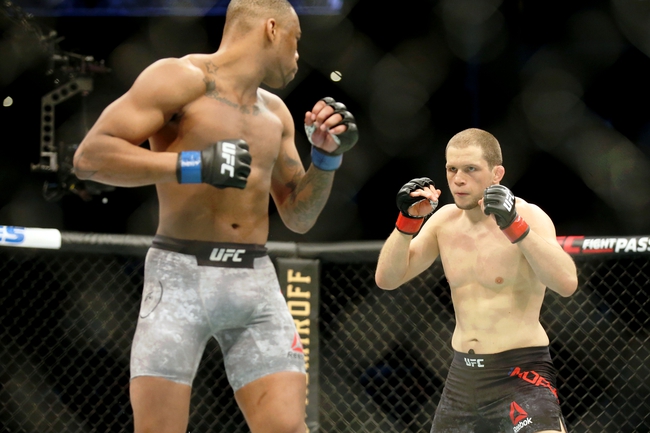 Abdul Razak Alhassan and.Khaos Williams face off in a welterweight bout for a co-main event of UFC Vegas 14 at the UFC Apex in Las Vegas.

Abdul Razak Alhassan comes into this fight with a 10-2 record overall, and coming into this fight he has won three of the last four fights. Alhassan’s last fight came against Mounir Lazzez and in that fight he was outstruck and taken down four times and that led to a unanimous decision loss. Alhassan has all kinds of power in his hands and his last three wins have all come by knockout. Alhassen is averaging 4.54 significant strikes per minute while absorbing 5.05 significant strikes per minute. Alhassan is also averaging 0.73 takedowns every 15 minutes but he is only successful on 28 percent of his attempts. Alhassan is averaging 0.0 submission attempts every 15 minutes so it would be very shocking to see him try and finish this fight that way.

On the other side of this fight is Khaos “The Oxfighter” Williams who comes into this fight with a 10-1 record and he won his only fight inside the UFC. Williams first fight in the UFC came against Alex Morono in February of 2020 and it didn’t take him long to finish off the fight. Williams had ten significant strikes in the first 27 seconds of the fight and he finished it by knockout.Because of the impressive win and the short time it took, his stats inside the UFC are a bit inflated. Williams is averaging 22.22 significant strikes per minute and he has a strike accuracy of 58 percent. In this fight look for Willaims to try and get out to a fast start and try to get the finish early.

These are two fighters who have all kinds of power and it shouldn’t take a whole lot of time for this fight to be finished. It’s going to come down to which fighter lands the big power punch first and with both guys having similar power, I will take my chance with the under. Back Khaos Williams to win this fight.