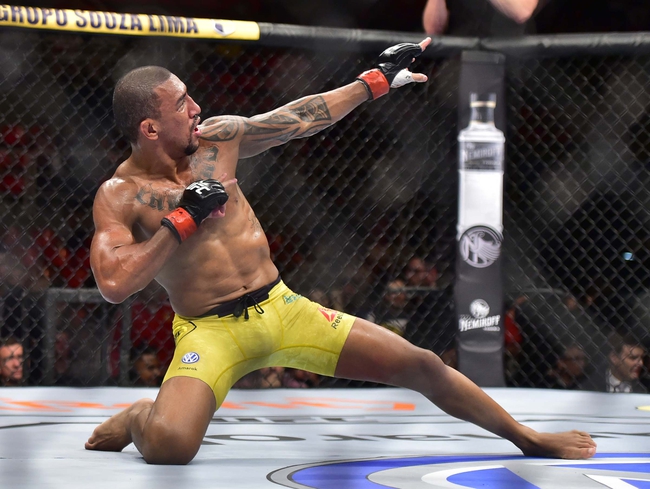 Raoni Barcelos and Khalid Taha face off in a bantamweight showdown at UFC Vegas 13 at the UFC Apex in Las Vegas.

Raoni Barcelos comes into this fight with a 15-1 record overall and since coming into the UFC he has a perfect 4-0 record. Barcelos' last fight came against Said Nurmagomedov in December of 2019 and it was a competitive fight, but he had two takedowns and that was enough to come away with the unanimous decision victory. The other three fights inside the octagon were won either by submission or knockout. Barcelos comes into this fight averaging 4.79 significant strikes per minute while absorbing 4.46 significant strikes per minute. Barcelos likes to get the fight to the ground and is averaging 2.31 takedowns every 15 minutes and he is successful on 58 percent of them. Barcelos also stops 83 percent of his opponents' takedown attempts.

On the other side of this matchup is Khalid Taha who comes into this fight with a 13-2 record overall but since coming into the UFC he has gone only 1-2. Taha’s last fight came back in October of 2019 and he lost that fight by an arm triangle. Taha actually had more was out striking Bruno Silva at the time he lost but he was also taken down two times in that fight. Taha comes into this fight averaging 2.64 significant strikes per minute while absorbing 2.29 significant strikes per minute. Taha doesn’t have any takedowns inside the UFC, but he stops 63 percent of his opponents' takedowns and in this fight, it’s going to be very important that his wrestling defense is strong or he is going to be in trouble.

Taha has struggled since coming into the UFC and Raoni Barcelos is going to have no issue getting the job done in this one. Look for Barcelos to get to the fight to the ground and he will win this fight. Barcelos is a heavy favorite though, and if you want to bet him, it should be in a parlay.