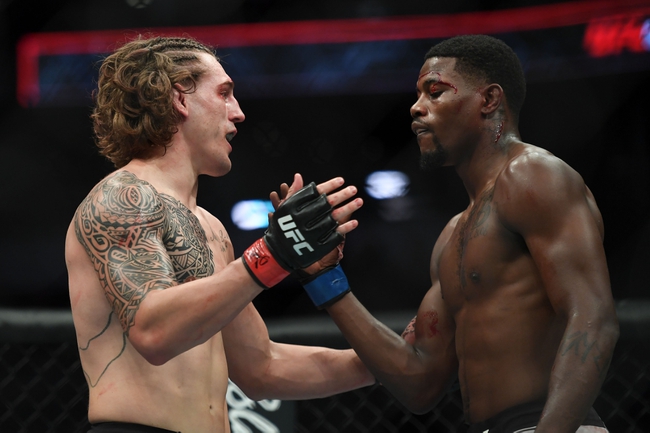 Ian Heinisch and Brendan Allen face off in a middleweight showdown at UFC Vegas 13 at the UFC Apex in Las Vegas.

Ian “The Hurricane” Heinisch comes into this game fight with a 14-3 record overall but coming into this fight he has lost two of his last three fights. The one win during that stretch for Heinisch was against Gerald Meerschaert in his last fight in June of 2020. Heinisch came out fast in that fight outstretching his opponent 20-3 and just over a minute into the fight he finished the fight by knockout. In the two losses, Heinisch lost by unanimous decision. Heinisch is averaging 3.62 significant strikes per minute while absorbing 2.85 significant strikes per minute. Heinisch is also strong, getting the fight to the ground averaging 1.16 takedowns every 15 minutes but he is only successful on 19 percent of the takedown attempts. Heinisch is averaging 0.5 submission attempts every 15 minutes but more often than not, he isn’t going to try to win the fight in that way.

Brendan “All In” Allen comes into this fight with a 15-3 record overall and since coming into the UFC he has won all four of his fights. Allen’s last fight came against Kyle Daukaus and even though he was taken down three times in that fight, he did have a knockdown, and that was enough to come away with a unanimous decision. Two of Allens wins in the UFC have come by submission and the other came by knockout. Allen comes into this fight averaging 2.67 significant strikes per minute while absorbing 2.55 significant strikes per minute. Allen is averaging 1.42 successful takedowns every 15 minutes and he is successful on 37 percent of his takedown attempts. Allen is averaging 2.4 submission attempts every 15 minutes and he will probably try to finish that fight.

These fighters are pretty even and it shows with the odds with this fight basically being a pick em at this point. Allen likes to get the fight to the ground, and he will get that done. Once Allen gets to the ground he will do his work and back him to get the job done.