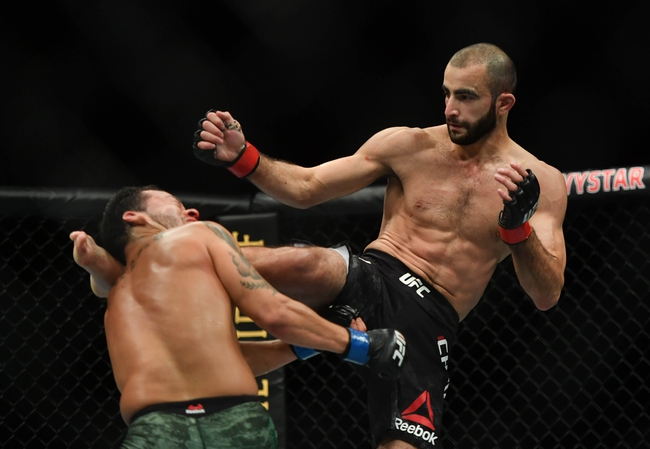 Giga Chikadze and Jamey Simmons face off in a featherweight showdown at UFC Vegas 13 at the UFC Apex in Las Vegas.

Giga Chikadze comes into this fight with an 11-2 record overall and coming into this one he has won four fights in a row. Chikadze’s last fight came against Omar Morales in October of 2020 and he was able to win that fight by unanimous decision. Chakadze outstruck his opponent 65-34 in that fight and he also had one knockdown. Each of his four wins in the UFC has come by decision. Chikadze is averaging 3.52 significant strikes while absorbing 2.76 significant strikes per minute. Chikadze is averaging 0.40 takedowns every 15 minutes and he is successful on 40 percent of his attempts. Chikadze also stops 65 percent of his opponents' takedown attempts. The one thing Chikadze probably won’t try to do is finish the fight by submission.

On the other side of this fight is Jamey “The Afro Samurai” Simmons and he comes into this fight with a 7-2 record. When Simmons steps into the octagon on Saturday, this will be his UFC debut. Simmons has won three fights in a row including his last fight that came in October of 2020. In that fight Simmons was able to lock in a rear-naked choke early in the second round and that led to a victory. Simmons has won four fights by knockouts, one by submission, and two by decision. One of Simmons' losses has come by knockout and the other loss was by submission. Simmons is a big underdog in this fight and the one thing he needs to do is get out to a fast start. The longer this fight goes on, the more trouble he could be in terms of coming away with a victory.

Giga Chikadze is the better fighter and it shows with the line but Chikadze doesn’t really have the knockout power and that is something Simmons does have. I am going to take a chance with Simmons in this fight to come away with a victory at a big underdog price.