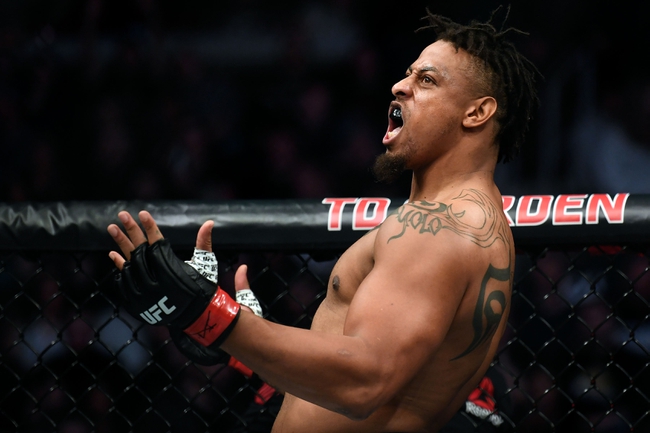 Maurice Green vs. Greg Hardy face off in a heavyweight bout in the main card at UFC Vegas 12 at the UFC Apex in Las Vegas.

Maurice “The Crochet Boss” Greene comes into this fight with a 9-5 record overall but coming into this fight he has lost two of his last three fights. Greene’s one win during that stretch was against Gian Villante in his last fight. Greene was actually being outstruck in that fight, but late in the 3rd round he locked in an arm triangle and won by submission. Greene is averaging 4.31 significant strikes per minute while absorbing 3.96 significant strikes per minute. Green likes to keep the fight on the feet but he struggles when his opponent gets it the ground. Greene stops only 33 percent of his opponents' takedown attempts. Greene is averaging 0.7 submission attempts every 15 minutes.

On the other side of this matchup is Greg “Prince of War” Hardy who used to be an NFL standout. Hardy comes into this fight with a 6-2 record and another fight ended in a no-contest. In Hardy’s last three fights he has one win, one loss, and one no-contest. Hardy’s last fight was against Yorgan De Castro and there was really no doubt he won the fight after out striking his opponent 55-24. Hardy is averaging 4.48 significant strikes per minute while absorbing 2.79 significant strikes per minute. Hardy wants to keep the fight on the feet and he does a good job of stopping the takedown. Hardy stops 83 percent of his opponents' takedown attempts but that isn’t something that should need to be used in this one. Hardy sometimes does get gassed as the fight goes on, and it might be smart for him to start a little slower and not use all of his energy in the first couple of minutes.

I really don’t like this fight because I don’t trust Greg Hardy to not do something stupid but I don’t see any way that Greene wins this fight unless Hardy is disqualified. In this one, Hardy is going to have no issue winning the fight, but I don’t see him getting the knockout. Back Hardy to win by decision.