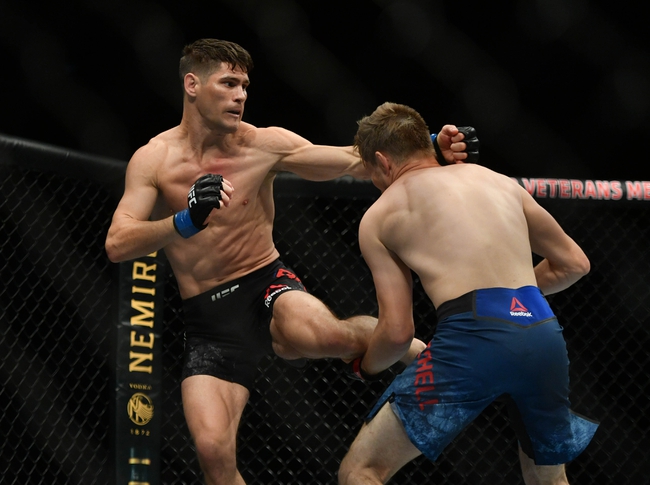 Bryce Mitchell and Andre Fili face off in a featherweight bout for the co-main event of UFC Vegas 12 at the UFC Apex in Las Vegas.

Bryce “Thug Nasty” Mitchell comes into this fight with a 13-1 record overall and since coming into the UFC he has won all four of his fights. All four of Mitchell’s fights in the UFC have gone to a decision. Mitchell’s last fight came against Charles Rosa in May of 2020 and he outstruck his opponent 40-5 and he had three takedowns and five submission attempts. Mitchell is a wrestler first that tries to control the fight from the start. Mitchell is averaging 2.05 significant strikes per minute while absorbing 1.36 significant strikes per minute. Thug Nasty is also averaging 2.13 successful takedowns every 15 minutes but he is successful on 41 percent of his takedown attempts. Mitchell is also averaging 2.7 submission attempts every 15 minutes.

On the other side of this matchup is Andre “Touchy” Fili who comes into this fight with a 21-7 record and he has won three of his last four fights. Fili’s last fight came in June of 2020 against Charles Jourdain and he was able to win that by split decision. Fili was outstruck in that fight, but he had five takedowns and that was enough for the victory. Fili is averaging 3.90 significant strikes per minute while absorbing 3.97 significant strikes per minute. Fili wants to get the fight onto the ground averaging 2.71 successful takedowns every 15 minutes. Fili is successful on 49 percent of his takedown attempts and he stops 69 percent of his opponents takedown attempts. Fili is averaging 0.2 submission attempts every 15 minutes.

One thing we do know for sure about this fight is it will probably take place on the ground. These are both good fighters, but Mitchell is stronger and a little more talented. Back Mitchell on the money line and I will also be laying a few dollars on Mitchell to win by decision.