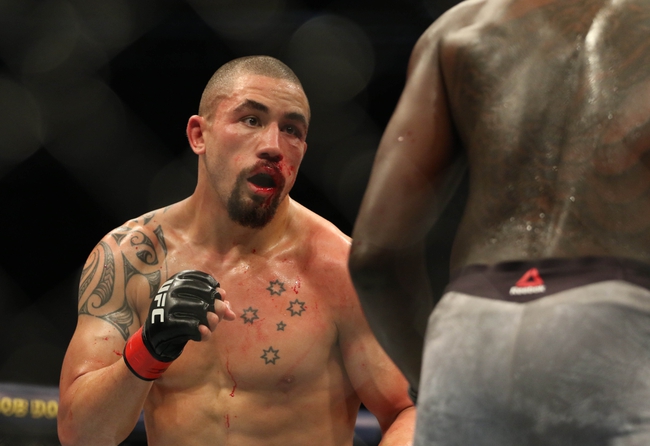 Robert Whittaker and Jared Cannonier face off for the middleweight bout in the co-main event of UFC 254 at UFC Fight Island in Abu Dhabi at the United Arab Emirates.

Robert “The Reaper” Whittaker comes into this fight with a 22-5 record overall and coming into this fight he has won ten of his last 11 fights. Whittaker’s only loss came two fights ago against Israel Adesanya, a fight he lost in the second round. Whittaker did bounce back in a big way in the last fight against Darren Till. Whittaker outstruck Till 69-41 and he also had two takedowns, which was enough to come away with a unanimous decision. Whittaker is averaging 4.51 successful takedowns every 15 minutes while absorbing 3.43 significant strikes per minute. Whittaker is also averaging 0.46 successful takedowns every 15 minutes but he is only successful on 30 percent of his opponents takedown attempts. Whittaker is really good against his opponents takedown attempts stopping 84 percent of the attempts.

Jared “The Killa Gorilla” Cannonier comes into this fight with a 13-4 record overall and coming into this one he has won three fights in a row. Cannonier's last fight came against Jack Hermansson in September of 2019, a fight he stopped very early in the second round by knockout. Cannonier is averaging 3.72 significant strikes per minute while absorbing 2.82 significant strikes per minute. Cannonier is also averaging 0.18 successful takedowns every 15 minutes and he stops 51 percent of his opponents takedown attempts. Cannonier suffered a torn pectoral muscle all the way back in February that has held him out of the competition. There have been longer layoffs for some, but Whittaker is quite the test for Cannonier to face.

This has fight of the night written all over it, but I will go with the fighter who has had more of the big wins during his career. Whittaker is the more explosive fighter, and Cannonier doesn’t have the power to land the big knockout. Back Whittaker to get the job done on the money line. If you are looking for a little added value take Whittaker to win this fight by finish.