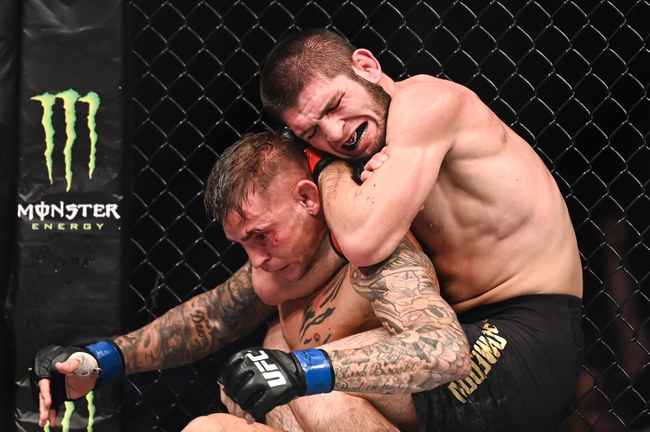 Justin Gaethje and Khabib Nurmagomedov face off for the lightweight title for the main event for UFC 254 at UFC Fight Island in Abu Dhabi in the United Arab Emirates.

Khabib Nurmagomedov is a perfect 28-0 and he has had successful title defenses in each of his last three fights. Nurmagomedov might not be the most incredibly exciting fighter, but he is a successful one because he sticks to his guns. He wants to get the fight to the ground, and once he gets it there, he is going to try and grind down his opponents. The Eagle comes into this fight averaging 4.11 significant strikes per minute while absorbing 1.65 significant strikes per minute. Nurmagomedov is averaging 5.35 successful submission attempts every 15 minutes and he also stops 84 percent of his opponents' takedown attempts. Nurmagomedov is also averaging 0.7 submission attempts every 15 minutes. In this fight, goal number one for Nurmagomedov needs to be to get the fight to the ground and avoid the power that Gaethje has in his hands.

Justin “The Highlight” Gaethje comes into this fight with a 22-2 record overall and coming into this fight he has won four fights in a row. Gaethje’s last fight was for the interim belt against Tony Ferguson, and late in the 5th round, he won the fight by knockout. Gaethje is an ultra-aggressive fighter who isn’t afraid to take damage. Gaethje is averaging 7.74 significant strikes per minute while absorbing 8.37 significant strikes per minute. Gaethje is a standup fighter and he is averaging 0.0 successful takedowns every 15 minutes and 0.0 submission attempts every 15 minutes. Gaethje stops 80 percent of his opponents' takedown attempts and in this fight, it’s going to be important that he keeps the fight on the feet. He also needs to try and inflict some damage early. Gaethje is a strong wrestler, but this is going to be his biggest test to date.