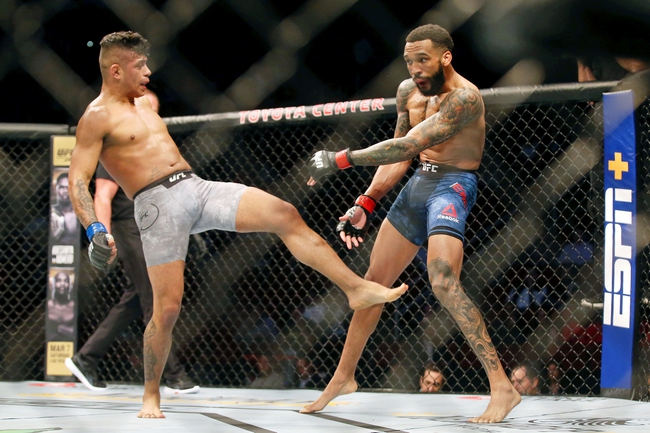 Thomas Almeida and Jonathan Martinez  face off in a featherweight bout on Saturday at UFC Fight Night 180 at UFC Island, in the United Arab Emirates.

Thomas Almeida has found a whole lot of success during his career winning 22 fights, but coming into this fight he has lost three of his last four fights. Almeida’s last fight came against Rob Front in January of 2020 and in the second round he was knocked out. Two of Almeida’s three losses have come by knockout. Almeida is averaging 5.66 significant strikes per minute while absorbing 4.65 significant strikes per minute. Almeida is strictly a standup fighter and he hasn’t had a takedown yet in the UFC. Almeida also isn't going to try and finish the fight with a submission attempt.

Jonathan “Dragon” Martinez comes into this fight with a 12-3 record overall but two of those losses did come in his last five fights. Martinez’s last fight came in August of 2020 against Frankie Saenz, a fight he finished early in the third round with his knees. Before the knockout Martinez was dominating the fight and even if it went to the judges scorecard he was coming away with a victory. Martinez is averaging 4.22 significant strikes per minute while absorbing 3.46 significant strikes per minute. Martinez usually likes to keep the fight on the feet but he is averaging 0.64 successful takedowns every 15 minutes but he is only successful on 37 percent of his takedown attempts. In this one if he wants to win it’s going to be about settling in early causing damage

Martinez is a slight underdog in this fight, but he is still going to find a way to get the job done in this one. Look for Martinez to come out fast, land some early damage, and Almeida will have no answer. Back Martinez on the money line.