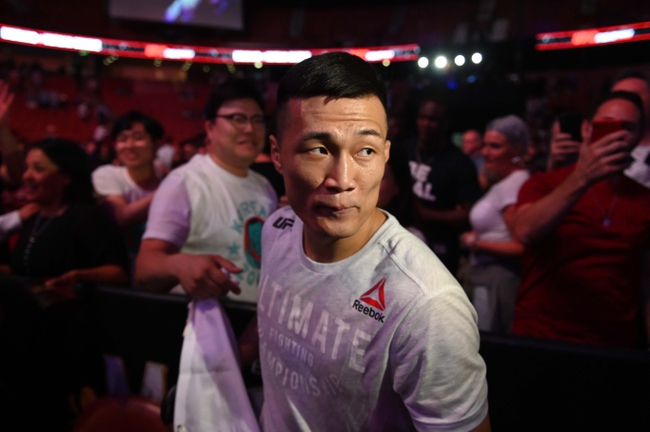 Chan Sung Jung "The Korean Zombie" vs Brian Ortega face off in a featherweight bout in the main event on Saturday at UFC Fight Night 180 at UFC Island, in the United Arab Emirates.

Dana White has said the winner of this fight will get a chance at the featherweight bout.

Brian “T-City” Ortega comes into this fight with a 14-1 record with his only loss coming in the last fight against Max Holloway, one that was for the belt. In that fight, Ortega was dominated from the start and in the 4th round, he was finished by TKO. One problem for Ortega coming into this fight is his last fight came all the way back in 2018. Ortega had won six fights in a row before his previous loss and all three wins were by finish. Ortega comes into this fight averaging 4.07 strikes per minute while absorbing 7.36 significant strikes per minute. Ortega is also averaging 0.51 successful takedowns every 15 minutes but he is only successful on 16 percent of his takedown attempts. Ortega also tries 1.4 submission attempts every 15 minutes.

Ortega took a lot of damage in the last fight against Holloway and it’s going to happen again in this one. Look for the Korean Zombie to find success in this one with his hands and he is going to finish the fight by knockout.

Get Premium Picks Start Winning Now »
The pick in this article is the opinion of the writer, not a PickDawgz site consensus.
Previous Pick
UFC Fight Night 180: Jessica Andrade vs. Katlyn Chookagian Picks and Predictions
Next Pick
UFC 254: Lauren Murphy vs. Liliya Shakirova Picks and Predictions