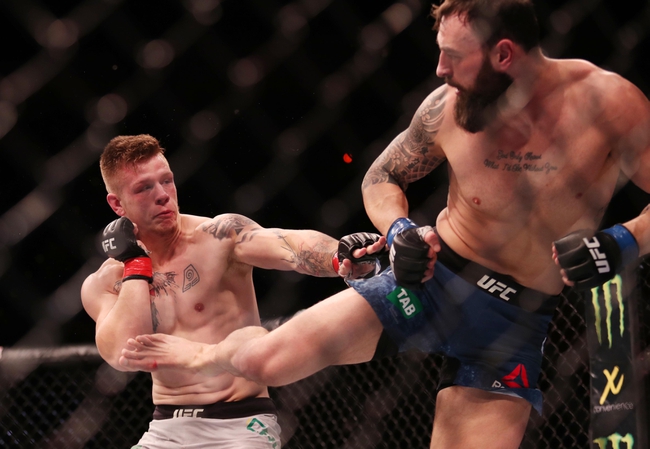 Jim Crute and Modestas Bukauskas face off in a light heavyweight bout on Saturday at UFC Fight Night 180 at UFC Island, in the United Arab Emirates.

Jim Crute comes into this fight with an 11-1 record overall and since coming into the UFC he has gone 4-1. Crute’s last fight came against Michal Oleksiejczuk in February of 2020 and it was a little over halfway through the first round that he finished the fight by a Kimura choke. Each of Crute’s found wins in the UFC have come by finish. Crute comes into this one averaging 4.08 significant strikes per minute while absorbing 2.23 significant strikes per minute. Crute is averaging 4.63 successful takedowns every 15 minutes and he is successful on 81 percent of his attempts. Crute is also a submission artist averaging 2.6 attempts every 15 minutes.

Modestas “The Baltic Gladiator” Bukauskas comes into this one with an 11-2 record overall and he was able to win his first fight inside the UFC. Bukauskas had his first fight against Andreas Michailidis and in that fight he was actually being outstruck but the fight was stopped inside the first and second round and he was named the winner. Mukauskas is averaging 3.60 significant strikes per minute but he only hits on 36 percent of his strikes and that is something that is going to need to change in this one. Bukauskas did stop all of his takedown attempts in the first fight and if there is any road to victory for him in this one, that might be it.

Bukauskas looked good in his first fight in the UFC but this is a big step up in competition and he is going to have no answer. Look for Bukauskas to be taken down often in this fight, and Crute is going to find a way to get the finish. Back Jimmy Crute to win this game by finish. I will also be placing a few dollars on Crute to win this fight in the first round, but that is more of just a lean.