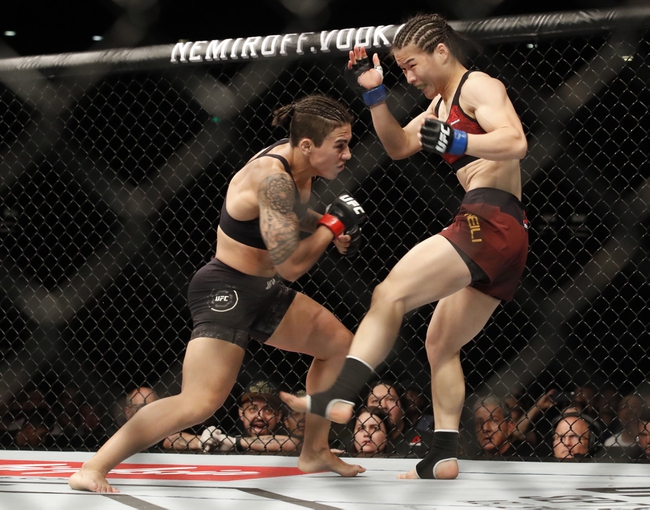 Jessica Andrade and Katlyn Chookagian face off in a women’s flyweight bout for the co-main event on Saturday at UFC Fight Night 180 at UFC Island, in the United Arab Emirates.

Jessica “Bate Estaca” Andrade comes into this fight with a 20-8 record but she has lost each of her last two fights Andrade lost against Zhang Welli in August of 2019 and then again to Rose Namejunas in July of 2020. In that last fight, Andrade was competitive and she did have a takedown but she lost by a split decision. Andrade is a busy fighter who likes to deal out a lot of damage. Andrade is averaging 6.40 significant strikes per minute while absorbing 5.30 significant strikes per minute. Andrade likes to get the fight to the ground too and is averaging 3.02 successful takedowns every 15 minutes. Andrade is successful on 57 percent of her takedown attempts. Andrade is also averaging 0.4 submission attempts every 15 minutes.

On the other side of this fight is Katlyn “Blonde Fighter” Chookagian who comes into this fight with a 14-3 record overall and coming into this fight she has won three of her four fights. Chookagian’s last fight came against Antonio Shevchenko in May of 2020 and there was really no doubt that she had won that fight. Chookagian outstruck Shevchenko 73-25 in that fight and she also had three takedowns and four submission attempts. Chookagian is averaging 4.19 significant strikes per minute while absorbing 4.20 significant strikes per minute. Chookagian likes to keep the fight on the feet and is only averaging 0.31 successful takedowns every 15 minutes but she is only successful on 15 percent of his takedown attempts. Chookagian is also averaging 0.5 submission attempts every 15 minutes.

These are two ladies who like to inflict a lot of damage, but they also both have strong chins and this is going to be a fight that doesn’t have the finish. It’s a toss-up who will win, but back this fight to go the distance. It's a lean to the underdog to cash in the fight, but the play is with the fight to the go the distance.