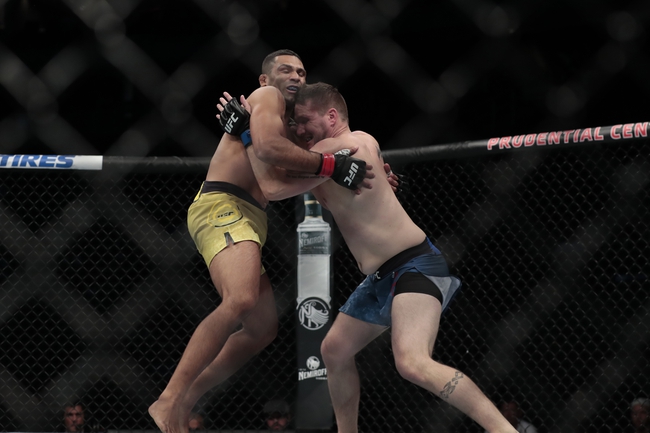 Claudio Silva and James Krause face off in a welterweight bout on Saturday at UFC Fight Night 180 at UFC Island, in the United Arab Emirates.

Claudo “Hannibal” Silva comes into this fight with a 14-1 record overall and since coming into the UFC he has won all five of his fights. Each of Silva’s last three wins have all come by submission. Silva’s last fight came against Cole Williams in August of 2019 and it was a little over halfway through the first round that he finished the fight by neck crank. Silva comes into this fight averaging 2.80 significant strikes per minute while absorbing 2.17 significant strikes per minute. Silva likes to get the fight to the ground and is averaging 3.32 successful takedowns every 15 minutes but he is only successful on 33 percent of his takedown attempts. Silva is averaging 2.1 submission attempts every 15 minutes.

On the other side of this matchup is James “The” Krause and coming into this fight he sits with a 27-9 record. Krause had won six fights in a row before losing his last fight against Tevin Giles. Krause was competitive in that fight, but he lost by split decision. Each of Krause’s last two wins were by knockout with one coming by punch and other coming by flying knee. Krause is averaging 4.65 significant strikes per minute while absorbing 4.09 significant strikes per minute. Krause is averaging 1.05 successful takedowns every minutes but he is only successful on 18 percent of his takedown attempts. Krause is also averaging 1.0 submission attempts every 15 minutes.

This is a step up in competition for Silva but he is ready for the challenge and he's going to get the job done in this one. Look for Silva to lock in one of the submission attempts and come away with the victory. Back Silva at plus money.