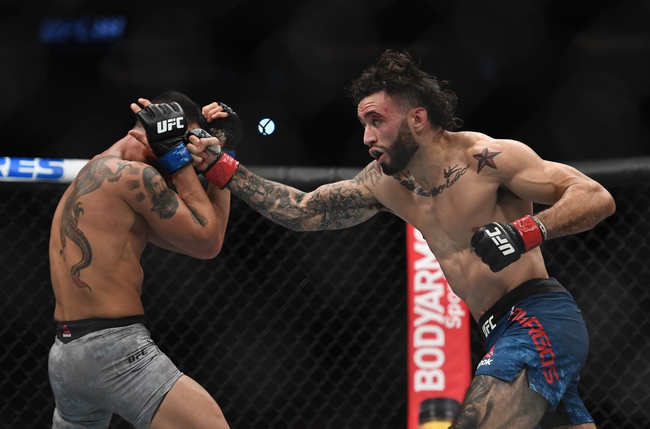 Edson Barboza and Makwan Amirkhani face off in a featherweight showdown for the main event at UFC Fight Night 179 at Fight Island in Abu Dhabi.

Edson “Junior” Barboza has found a lot of success inside the UFC but as of late he has struggled a bit more. Barboza comes into this fight with a 20-9 record overall but he has lost five of his last six fights. Barboza’s last fight was against Dan Ige in May of 2020 and he was competitive in that fight but won by split decision. Barboza is averaging 4,08 significant strikes per minute while absorbing 4.22 significant strikes per minute. Barboza is also averaging 0.46 successful takedowns every 15 minutes and he is successful on 44 percent of his attempts. Barboza also stops 80 percent of his opponents' takedown attempts. In this fight if Barboza wants to come away with a win, he needs to do his best to avoid damage. Don’t be shocked if Barboza uses a very tentative approach in this game.

On the other side of this fight is Makwan “Mr. Finland” Amirkhani comes into this fight with a 16-4 record overall and he has won two of his last three fights. Amirkhani’s last fight was against Danny Henry in July of 2020 and in that fight it a little over midway through the 1st round that he won by submission. Amirkhani is averaging 1.55 significant strikes per minute while absorbing 2.73 significant strikes per minute. Amirkhani is averaging 3.45 successful takedowns every 15 minutes but he is only successful on 36 percent of his attempts. He is also stopping 57 percent of his opponents' takedown attempts and tries 1.6 submission attempts every 15 minutes.

Amirkhani is a big underdog but I think the wrong fighter is favored in this game. Look for Amirkhani to get the fight to the ground and he will control the fight. He might not do enough to finish the fight, but he is going to come away with a victory as a big underdog.