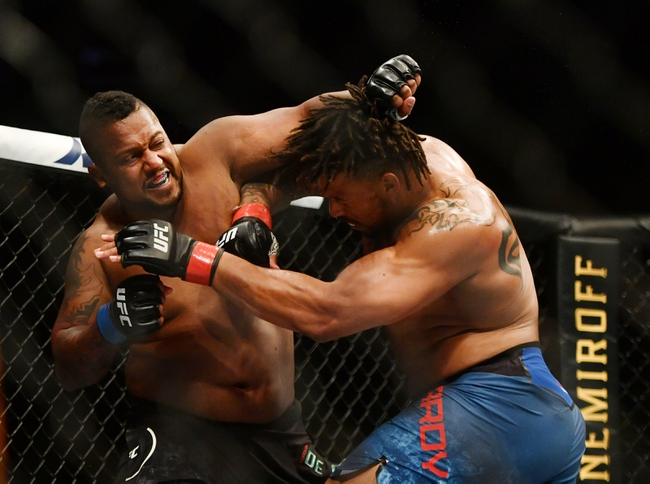 Yorgan De Castro and Carlos Felipe face off in a heavyweight showdown for the co-main event of UFC on ESPN 16 at Fight Island at Abu Dhabi, United Arab Emirates.

Yorgan “The Mad Titan” De Castro comes into this fight with a 6-1 record overall and since coming into the UFC he has a 1-1 record. After opening up his UFC career with a win over Justin Tafa in October of 2019 and in that fight he finished it by knockout early in the first round. De Castro’s second fight inside the UFC came against Greg Hardy and he was dominated. He was outstruck 55-44 in that fight and when it went to the judges scorecard, he lost by unanimous decision. De Castro is averaging 2.19 significant strikes per minute while absorbing 2.99 significant strikes per minute. DeCastro is averaging 0.0 submission attempts every 15 minutes but he does stop 75 percent of his opponents' takedown attempts. In this fight, De Castro needs to get out to a fast start and try to finish it early.

On the other side of this matchup is Carlos “Boi” Felipe who comes into this fight with an 8-1 record overall with his only loss coming in his last fight in July of 2020. Felipe’s last fight was against Serghei Spivac, and in that one the fight went the distance and he lost by majority decision. Felipe was taken down three times during the fight and that led to him losing control of the fight. Felipe is averaging 2.93 significant strikes per minute while absorbing 4.87 significant strikes per minute. Felipe is averaging 0.0 successful takedowns and he stops 67 percent of his takedown attempts.

Felipe looked outmatched his last fight, and it’s not going to get any easier in this one. Look for De Castro to take control of this fight early, and Felipe will have no answer. Back De Castro to get the job done in this one by knockout. If you are comfortable taking him on the money line that is the safer play, but that is a big number to lay.