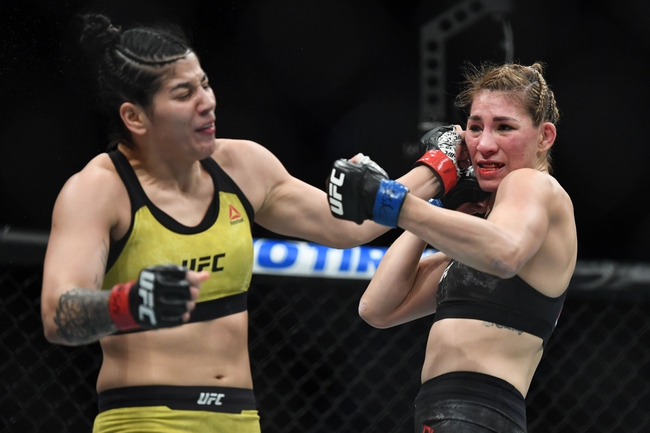 Ketlen “Fenomeno” Vieira comes into this fight with a 10-1 record and since coming into the UFC she has gone 4-1. Vieira’s only loss inside the UFC came back in December of 2019, against Irene Aldana, a fight she lost late in the first round by knockout. Vieira has had two wins by a split decision, one win by unanimous decision, and the other fight being won by an arm triangle submission. Vieira is currently averaging 2.74 significant strikes per minute while absorbing 3.82 submission attempts every 15 minutes. Vieira is averaging 2.03 successful takedowns every 15 minutes and he is successful on 57 percent of his takedown attempts. Vieira is also really good against takedowns, stopping 92 percent of his opponents' attempts. Vieira is also averaging 0.8 submission attempts every 15 minutes. ‘

On the other side of this matchup is Sijara Eubanks who comes into this one with a 7-4 record but she has won each of her last two fights. Overall in the UFC, Eubanks has gone 4-2. Eubanks last fight came against Julia Avila just two weeks ago. In that fight it went the distance, but there was really no question who was the winner. Eubanks outstruck Avila 53-34 and she also had three takedowns in that fight. Eubanks is averaging 4.71 significant strikes per minute while absorbing 3.14 significant strikes per minute. Eubanks is also averaging 2.17 successful takedowns every 15 minutes and she is successful on 48 percent of his attempts. Eubanks is also averaging 0.5 submission attempts every 15 minutes.  .

On paper these two fighters are very even and who is going to win is a true toss up. Even with those questions, this is a fight that is going to be a grind it out battle. Look for this fight to go the distance.