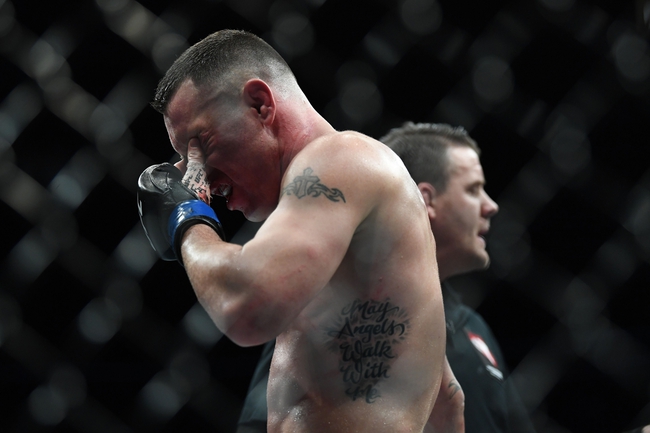 Tyron Woodley and Colby Covington face off in a welterweight showdown for the main event of UFC Vegas 11 at the UFC Apex in Las Vegas on Saturday. Covington is the second-ranked fighter while Woodley is ranked 4th. There has been plenty of trash talking by both sides heading into this fight.

Tyron “The Chosen One” Woodley comes into this fight with a 19-5-1 record overall but he has struggled a bit as of late losing two fights in a row. Woodley’s last fight came against Gilbert Burns in May of 2020 and in that fight Woodley looked outclassed.being taken down two times and being outstruck 83-28. Woodley lost by unanimous decision, and in this game the expectation has to be that he is going to come out stronger. Woodley comes into this fight averaging 2.38 significant strikes per minute while absorbing 2.65 significant strikes per minute. Woodley is also averaging 1.11 successful takedowns every 15 minutes. Woodley’s takedown defense is also elite, stopping 90 percent of opponents takedown attempts. In this fight, Woodley needs the defense to be good or they could be in some trouble.

On the other side of this fight is Colby “Chaos” Covington who comes into this fight with a 15-2 record and coming into this one he has won seven of his last eight fights. The only loss for Covington during that stretch was in his last fight in December against Kamaru Usman and Covington was competitive in that fight but he was knocked out in the 5th round. Each of the previous five wins by Covington all came by unanimous decision. Covington comes into this fight averaging 4.17 significant strikes every 15 minutes while absorbing 3.02 significant strikes per minute. Covington is a wrestler first and coming into this fight he is averaging 4.91 successful takedowns every 15 minutes and he is successful on 51 percent of his attempts.

This fight is also going to come down to Covington’s wrestling against Woodley’s takedown defense. Woodley has good takedown defense, but Covington doesn’t care, he is a superior fighter. Look for Covington to have a big fight and he will win by unanimous decision.