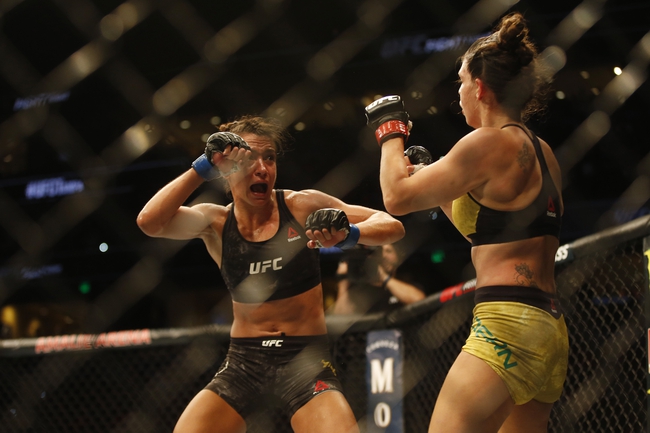 Mackenzie Dern and Randa Markos face off in a women’s strawweight showdown for the main event of UFC Vegas 11 at the UFC Apex in Las Vegas on Saturday.

Mackenzie Dern comes into this fight with an 8-1 record and since coming into the UFC he has won three of her four fights. Dern’s last fight came against Hannah Cifers in May of 2020 and in that fight she won by submission midway through the first round. Dern’s only loss came in October of 2019 against Amanda Ribas a fight she lost by unanimous decision. Two of Dern's three wins inside the UFC came by submission. Dern is averaging 3.14 significant strikes per minute while absorbing 3.97 significant strikes per minute. Dern likes to keep the fight on the feet but she is averaging 0.43 successful takedowns every 15 minutes. Dern is only successful on seven perfect of her takedown attempts. Dern is also averaging 1.3 submission attempts every 15 minutes.

On the other side of this matchup is Randa “The Quiet Storm” Markos who comes into this fight with a 10-9-1 record she has lost four of his last six fights. Markos last fight came against Amanda Ribas in March of 2020 and in that fight she lost by unanimous decision. Markos last win came in October of 2019 against Ashley Yoder and that one she won by split decision. Markos is averaging 2.96 significant strikes per minute while absorbing 3.31 significant strikes per minute. Markos is also averaging 1.35 successful takedowns every 15 minutes but she is only successful on 27 percent of her attempts. Markos is averaging 0.2 submission attempts every 15 minutes.

Both of these fighters have lost to the same opponent so there is no advantage there, because both ladies struggled against Ribas. In terms of talent though, Dern is the much better fighter and she is going to have no issues getting the job done in this one. Back Dern to come away with a victory.