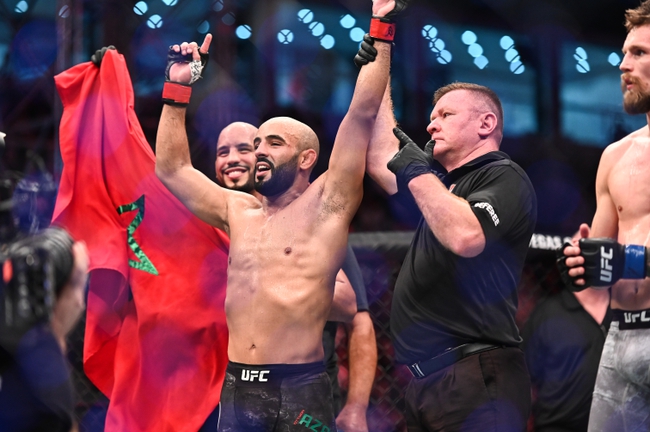 Ottman Azaitar and Khama Worthy face off in a lightweight showdown for the co-main event for UFC Vegas 10 at the UFC Apex in Las Vegas. Both of these fighters are currently unranked.

Ottman “Bulldozer” Azaitar hopes that he can make a run up the standings and he currently has a perfect 12-0 record. Azaitar is a boxer first and he has made one start inside the UFC octagon. His first fight in the UFC came back in September of 2019 against Teemu Packalen and in that fight midway through the first round, he finished the fight by knockout. Azaitar outstruck his opponent 27-8 and that entire fight stayed on the feet. Azaitar is averaging 7.61 significant strikes per minute and he was successful on 50 percent of his strikes. He is also absorbing 2.25 significant strikes per minute. Azaitar also stopped 100 percent of his opponents takedown attempts.

Khama “The Death Star” Worthy is on the side of this matchup and coming into this fight he sits with a 16-6 record and since coming into the UFC he has won each of his two fights. Worthy’s last fight came in June of 2020 against Luis Pena. In that fight, Worthy had been taken down three times already in that fight, but midway through the third round he was able to lock in the guillotine choke and that was enough to come away with a victory. Worthy is averaging 4.44 significant strikes per minute while absorbing 3.09 significant strikes per minute. Worthy doesn’t have a takedown yet inside the UFC and has stopped 57 percent of his opponents' takedown attempts. Worthy is also averaging 0.9 submission attempts every 15 minutes. Each of Worthy’s two fights inside the UFC have come by finish, but his last fight did last until the 3rd round.

This fight probably should be talked about more, because both of these fighters are very hyped. Azaitar has a little more power in his hands and that will be the difference. The Bulldozer is the underdog but will come away with the victory.