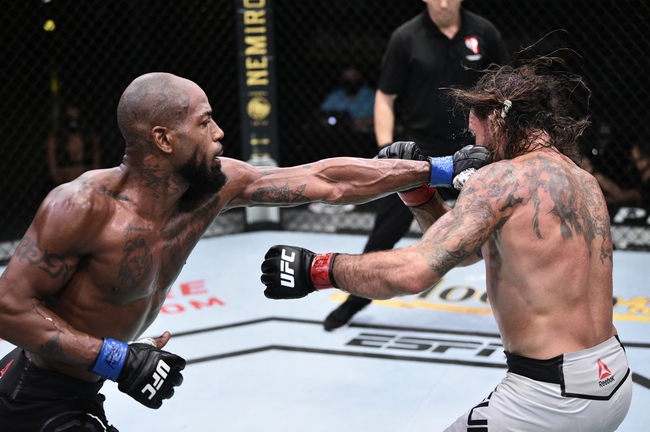 Bobby Green and Alan Patrick face off in a lightweight showdown in UFC Vegas 10 at the UFC Apex in Las Vegas. Both of these fighters are currently unranked.

Bobby “King” Green comes into this fight with a 26-10-1 record overall and coming into this fight he has won two fights in a row. Before this little winning streak though, Green had lost two fights in a row. Each of Green’s last four fights have been decided by unanimous decision. Green comes into this fight averaging 5.22 significant strikes a minute while absorbing 3.52 significant strikes per minute. Green is also averaging 1.33 successful takedowns every 15 minutes One real strength of Green’s game is stopping the takedown, being successful stopping his opponent 73 percent of the time. Green also averages 0.4 submissission attempts every 15 minutes.

Alan “Nuguette” Patrick comes into this fight with a 15-2 record overall and over his last four fights he has three wins. Patrick’s only loss during that stretch was in his last fight against Scott Holtzman but that came all the way back in October of 2018. In that fight, Patrick was outstruck 73-25 and he was worn down and late in the 3rd round he was knocked out. Patrick’s strategy is very easy, he wants to get the fight to the ground early. Patrick is averaging 1.88 significant strikes per minute while absorbing 2.39 significant strikes per minute. Patrick is averaging 3.92 successful takedowns every 15 minutes and he is successful on 40 percent of his attempts. Patrick also stops 60 percent of his opponent takedown attempts.

Patrick had a long layoff and I think there is going to be some rust in this game. Look for Green to use his power. I expect Green to win by finish, but if you aren’t worried about laying the juice, Green on the money line is the safer play.