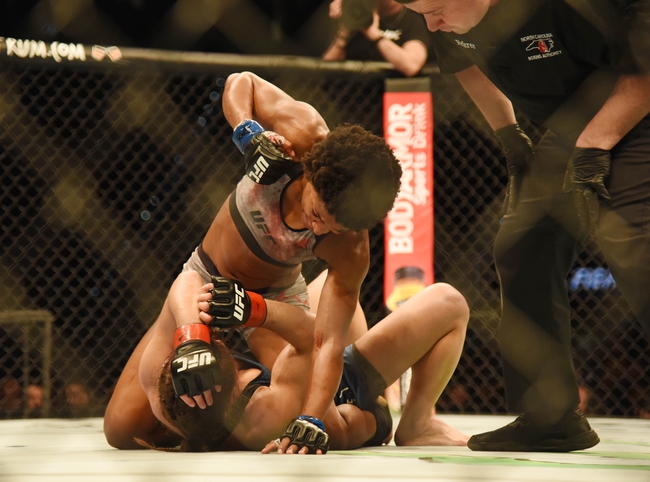 Angela Hill and Michelle Waterson face off in a women’s strawweight showdown for the main event for UFC Vegas 10 at the UFC Apex in Las Vegas. Hill is currently 8th in the division while HIll is ranked 13th.

Angela “Overkill” HIll comes into this fight with a 12-8 record overall but she is coming off a loss in their last fight. Hill’s last fight came in May of 2020 against Claudia Gadelha and it was a competitive fight but she lost by a split decision. In that fight, Hill outstruck Gadelha 90-84 in that fight, but she was taken down once in that fight Hill’s last win came against Loma Lookboonmee in February of 2020 and although Hill was outstruck in that fight, but she still came away with a unanimous decision. Hill is a power fighter who likes to throw punches in bunches. Hill is averaging 5.76 significant strikes per minute while absorbing 5.17 significant strikes per minute. Hill is also averaging 0.47 successful takedowns every 15 minutes and she is successful on 37 percent of the attempts. Hill is averaging 0.2 submission attempts every 15 minutes. Hill’s last two finishes have come with her elbows.

Michelle “The Karate Hottie” Waterson comes into this fight with a 17-8 record overall but coming into this one she has lost two fights in a row. Two fights ago Waterson lost to Joanna Jedrzejczyk and in the last fight, Carla Esparaza got the best of her winning by split decision. Before the two losses, Waterson had won three fights in a row and each of those came by decision. Waterson’s last six fights have been finished by decision.

Hill has more power in her hands and she is going to have no issue getting the job done in this one. Look for her to get out to a fast start, wearing down Waterson, and this could be a fight where Waterson is finished. Back Hill on the money line.