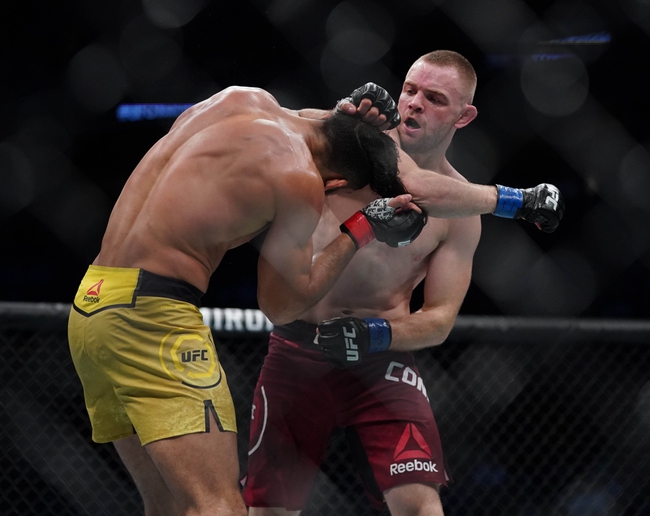 Michel Pereira and Zelim Imadaev face off on Saturday night in a welterweight showdown at UFC Vegas 9 at the UFC APEX in Las Vegas.

Michel Pereira is one of the more entertaining fighters in the UFC, but so far that hasn’t quite turned into success. Pereira has a 23-11 record overall but since winning her UFC opener, he has lost two fights in a row. Pereira’s last fight came in February of 2020 against Diego Sanchez, and Periera was dominating the fight,but he ended up getting disqualified. Pereira’s only win in the UFC came back in May of 2019 against Danny Roberts, and he was able to win that fight by a flying knee.

Pereira comes into this fight averaging 3.04 significant strikes per minute while absorbing 3.04 significant strikes per minute. Pereria is also averaging 2.00 successful takedowns every 15 minutes while being successful on 57 percent of his attempts. Pereira also has 100 percent takedown defense. In this fight, Pereira needs to be smart and not do anything that could cause him to be disqualified.

On the other side of this fight is Zelim Imadaev who comes into this fight with an 8-2 record but his two losses were in his two fights inside the UFC. Imadaev’s last fight came against Danny Roberts in November of 2019 and in that fight he struggled being outstruck and late in the second round he was finished by knockout. Imadaev is averaging 3.69 significant strikes per minute while absorbing 3.37 significant strikes per minute. Imadaev is averaging 0.6 successful takedowns every 15 minutes and he is successful on 50 percent of his attempts. He also stops 63 percent of his opponents' takedown attempts.

Both of these fighters have faced off with Roberts but Pereira was the only one to come away with a victory. Pereira is the better fighter and he is going to have no issue getting the job done in this fight. Look for Pereira to use his power to win this fight. If you are looking for extra value, take Pereira to win this fight by finish.