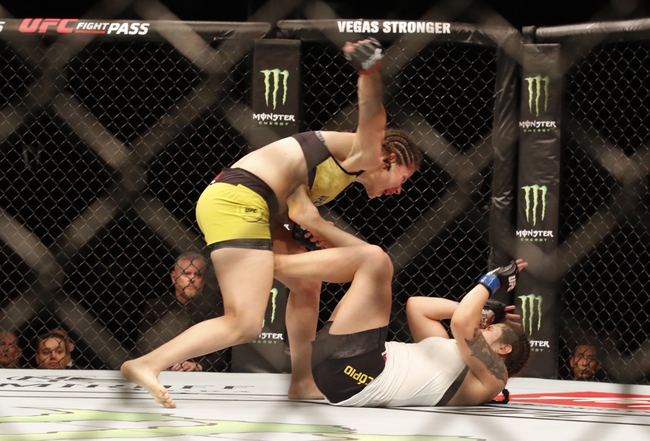 Sijara Eubanks and Karol Rosa face off on Saturday night in a women’s bantamweight showdown at UFC Vegas 9 at the UFC APEX in Las Vegas.

Sijara Eubanks comes into this fight with a 6-4 record overall and since coming into the UFC he has 3-2. Eubanks had lost two fights in a row heading into her last fight against Sarah Moras in May of 2020 and in that fight she dominated. Eubanks had two takedowns in that fight, outstruck Sarah Moras 85-44, and that led to a unanimous decision victory. Each of her three wins inside the UFC have come by unanimous decision. Eubanks is averaging 4.95 significant strikes per minute while absorbing 3.32 significant strikes per minute. Eubanks does have good striking defense stopping 60 percent of her opponents’ attempts. Eubanks loves to get the fight to the ground averaging 2.00 successful takedowns every 15 minutes and she is successful on 50 percent of the attempts. Eubanks also has a takedown defense of 66 percent. Eubanks is also averaging 0.0 submission attempts every 15 minutes.

Karol Rosa is on the other side of this matchup and coming into this fight she sits with a 13-3 record overall and since coming into the UFC she has gone 2-0. Rosa’s last fight came against Vanessa Melo in July of 2020 and it wasn’t all that close as she outstruck her opponent 120-45 and that was enough to come away with the unanimous decision. Rosa is averaging 9.70 significant strikes per minute while absorbing 7.00 significant strikes per minute. Rosa is also averaging 1.00 successful takedowns every 15 minutes and she is successful on 50 percent of her attempts. Rosa has also stopped down 100 percent of her opponents’ takedowns.

Rosa sure was impressive in his last start and she is going to get the job done. Look for Rosa to throw heavy punches early and often, and that will be enough to come away with a victory. This is a very nice price for Rosa and one of the strongest plays on the entire card.