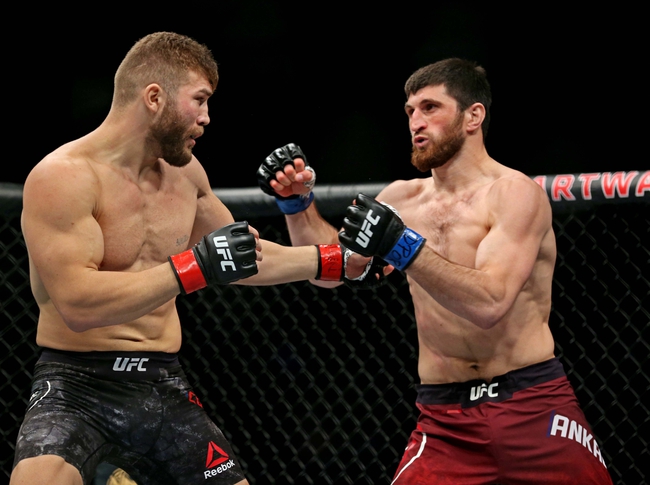 Magomed Ankalaev and Ion Cutelaba face off in a light heavyweight showdown at UFC Vegas 8 at the UFC APEX in Las Vegas on Saturday. Ankalaev is currently ranked 13th in the division while Cutelaba is unranked. This is a rematch after there was a whole lot of controversy in the first fight between these two guys. Cutelaba was playing a little possum after being hit by Analaev, but  the ref fell for it and the fight was stopped.

Magomed Ankalaev comes into this fight with a 13-1 record overall and coming into this fight he has won four in a row. Three of those four wins were by knockout and two of those knockouts happened in the first round. His goal is to get the job done in the first round and Ankalaev is averaging 3.46 significant strikes per minute while absorbing 1.24 significant strikes per minute. Ankalaev wants to keep the fight on the feet but he is averaging 0.68 successful takedowns every 15 minutes. He also is very good against the takedown defense stopping 85 percent of his opponents attempts. In this fight Ankalaev needs to get out to a fast start but he can’t assume  he will be able to do the same thing he did in the last fight. If he doesn’t get the knockout early, he can’t use all his energy in the first round.

On the other side of this matchup is Ion Cutelaba who is going to be trying to get some revenge in this fight. During his career, Cuelaba has a 15-5 record overall and during his last five fights he has won three times. Cutelaba’s last win came back in September of 2019 against Khalil Rountree Jr. and in that fight it didn’t take him long to finish that fight by knockout.

Cutelaba learned his lesson in the first fight and he is going to find a way to get the job done in this one. Look for Cutelaba to find success on the counter and find a way to come up with the victory.