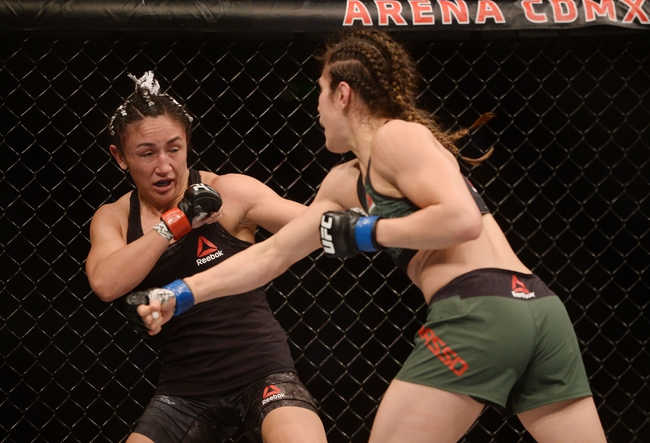 Ji Yeon Kim and Alexa Grasso face off in a women’s flyweight showdown at UFC Vegas 8 at the UFC APEX in Las Vegas on Saturday.

Ji Yeon “Firefist” Kim comes into this fight with a 9-2-2 record overall and since coming into the UFC she has gone 3-2. Kim’s last fight came against Nadia Kassem in October of 2019 and in that fight she dominated. Kim outstruck her opponent 80-45 and late in the second round she finished the fight with her fists. Each of Kim’s two losses inside the UFC were by unanimous decision, and her other two wins in the UFC were by split decision.

Kim comes into this fight averaging 4.49 significant strikes per minute while absorbing 4.74 significant strikes per minute. Kim is also averaging 0.00 successful takedowns every 15 minutes and he stops 40 percent of his opponents' attempts. Kim also averages 0.0 submission attempts every 15 minutes. Kim wants to keep the fight on the feet and use the power in her hands to find success.

Alexas Grasso comes into this fight with an 11-3 record but since coming into the UFC she only has a 3-3 record. In Grasso’s last game against Carla Esparza it was a fierce battle but she was taken down four times and that seemed to be the difference as she lost by unanimous decision. Grasso comes into this fight averaging 5.25 significant strikes per minute while absorbing 3.61 significant strikes per minute. Grasso is also averaging 0.19 successful takedowns every 15 minutes but she is only successful on 33 percent of the attempts. Grasso also stops 63 percent of her opponents' takedown attempts. Grasso is also averaging 0.6 submission attempts every 15 minutes.

Kim finished her last fight, but I don’t think she has enough power in her hands to tag Grasso and finish her. Look for Grasso, who is the better fighter to find success early in this one and come away with the victory.. Take Grasso to win by finish. If you are comfortable taking Grasso on the money line that play is fine, but that's a big number to lay.