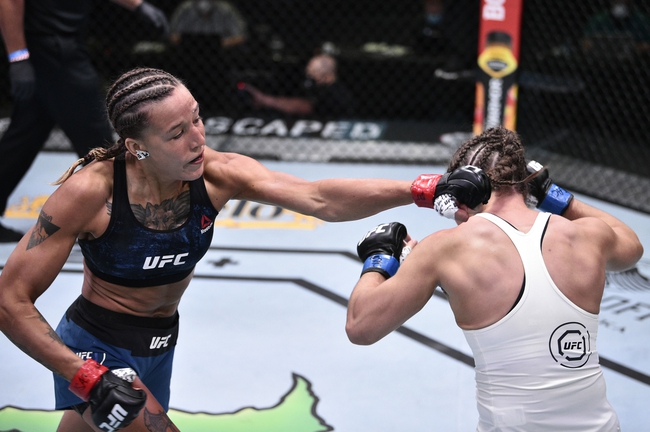 Mariya Agapova and Shana Dobson face off in a women’s flyweight showdown during ESPN 15 at the UFC APEX in Las Vegas on Saturday.

Mariya Agapova hopes that she can be an up and comer in the UFC but a loss in this game would really throw that off. Agapova comes into this fight with a 9-1 record overall and she had no issue in her first fight in the UFC. In that fight by Agapova against Hannah Cifers in June of 2020 it was only a couple of mines into the fight, that she finished the fight by a real naked choke.

Shana Dobson probably needs a win in this fight or it could be the end of her career inside the UFC. Overall Dobson comes into this fight with a 3-4 record and coming into this fight Dobson has lost three fights in a row. In Dobson’s last fight against Priscila Cachoeira it only took 40 seconds before she was knocked out. Dobson’s previous two losses were by knockout.

There is no value in this fight because of how big of a favorite Agapova is in this fight. That being said there is no other way to bet this fight than Agapova to win this fight by decision. Dobson got knocked out early in the last fight so if you are looking for some type of value, take Agapova to win by finish in the first round. Overall there is much better value on the board and unless you like laying big numbers, this is one to stay off.